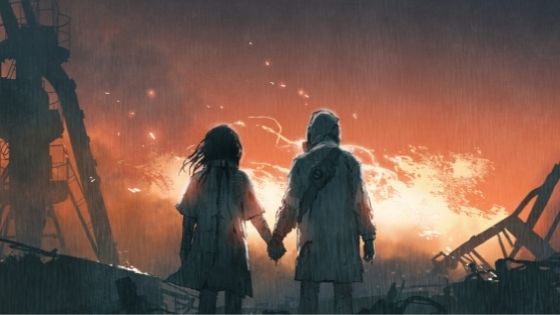 Carmen pressed her hands against the glass. She watched the spectacle taking place in the hall. It was complete and utter madness. Yet at the same time, it seemed so familiar. As if she had seen this scene playing out before her a hundred times before.

She knew what was going to happen next. Carmen wanted to close her eyes. She wanted to will away the events that she knew were about to unfold. Carmen had witnessed events like this before.

That was the worst part. Not being able to prevent it. She had tried before, but it was always useless. No matter what she tried, the events that played out in her mind always came to pass. Always. Without fail. It was the most horrible feeling in the world.

The feeling of abject terror of knowing what was going to happen along with the utter impotence of not being able to stop it. That was why she was here in this insane asylum.

Three years earlier she had foreseen horrible events of brutality and carnage on the streets. Rioters and protesters destroying the city she once loved. Carmen had foreseen the death of most of her loved ones in the fires that took place. In the shootings that took place in the clashes.

She had known that most of those she loved would die. Yet still, she tried to warn them. They laughed it off. Called her crazy. Her own brother had brought her in and admitted her himself.

“Don’t worry, sis. When this is over, I’ll come get you out myself,” he said.

That was the one thing that Carmen hadn’t foreseen. Him placing her in the looney house for confiding in him. She had known that he wouldn’t return. And here she remained even three years later.

She smiled grimly at the irony of the situation. Carmen knew what was going to happen to others, but she could never see what happened to herself.

In a way, not having had any more visions for the past three years had been a relief. They had been three years of peace and respite from the haunting visions that befell her.

Until today anyway. That old fluttery feeling had started up again. She had sensed it. And everything happened just the way she had foreseen. She didn’t even try to warn them. Carmen had seen them all die in the explosion. Seen the fires consume them.

But she didn’t bother to tell any of them that this was their last day. No one would have believed her anyway. She was locked up in an insane asylum. That would have only upped the dosage of her meds and gone on about their tasks.

And even if they had believed her, it wouldn’t have done any good. They would have all been dead before the end anyway. If they had tried to run, the flames would have followed them. Their death was certain. There was no escape.

She heard the explosions before she saw the fire and flames. Carmen didn’t cower or cringe. But even if she wanted to, the woman was locked in. There was nowhere for her to flee to.

Carmen heard the screams. She saw people running up and down the hall. And then there was silence. She knew the man was coming before she saw him. She had already witnessed his arrival.

The man paused outside her window. He turned to look at her. Reached up. Placed his hand on the glass.

“Carmen,” he mouthed through the thick glass that separated them.

She reached up and placed her hand on the other side of his. This was where the vision stopped. This had been the last thing she had foreseen. After this, everything that would take place was a mystery.

His name was Scottie. He had been admitted to the institution a few months back. But they had never spoken before today. Someone had told her that he had no memories before being brought here.

Scottie stepped over to the door and opened it from the outside. Carmen fell into his arms sobbing.

“There were whispers that you mentioned this to the others. How did you know?” he asked sternly. “Were you a part of this plan?”

Carmen took a sharp breath and a step back. She shook her head. Tried to deny it, but knew it would do no good. It never did. No matter what she said, nobody ever believed her.

“You told someone earlier that there would be fire before the end of the day,” he growled.

Scottie turned to leave the room and slid a gas mask back over his face. Carmen shook her head, silently kicking herself for not having kept her mouth shut as she followed him. Even if those she loved didn’t die, she lost them because of this curse she carried.

He stood close to the fire. Silently watching it. A sheet of paper from the nurse’s station floated down the hall under the effects of the warm draft.

Scottie bent over to pick it up. A patient information sheet. Carmen glanced at it. Her name written at the top.

“It says that you have strange visions and claim to see future events,” he asked.

Carmen nodded silently without looking up at him.

“Do you find that strange?” she asked. Still not looking up.

Scottie didn’t answer right away. After a few moments of silence, Carmen looked over at him. He didn’t look back at her but could tell she was watching. The man shook his head. A few more moments of silence before he spoke up.

“No. Not anymore. I just remembered who I am and why I’m here? I can travel back through time. And I remember having seen you before.”

“Maybe it’s destiny,” she said. “Have I traveled with you before?”

“Maybe that’s why I have all these visions. These foreshadowings are simply things that have already happened and that I’ve lived through before,” she finally managed to say.

Carmen reached out and took his hand.

“I want to go with you,” she said. “I want to see my brother one more time. Maybe this time, I’ll remember enough to make a difference.”