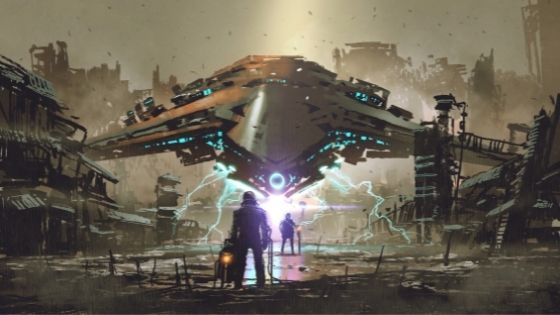 Mahesh set the power pack down on the ground and let out a long sigh. Partly from the relief of having arrived, but mostly from the exhaustion of carrying the heavy weight. It felt good to stretch.

“So, where is it?” Cliff grunted as he set down his powered stake as well.

“Not sure exactly,” Mahesh replied. “But it must be nearby. Both packs are fully lit up. We’ll have to walk around one at a time until we get a lock on it.”

Mahesh picked up his pack with a low grunt. He walked away from Cliff until the orange light down the front of the power pack started to dim. He turned around and walked back a few more steps.

“Okay,” he hollered. “This is about the edge of my limit. Take the power stake back and to the left until it starts to dim.”

He watched as Cliff struggled to carry the power pack in front of his body so he could observe the light source until it began to dim. Cliff paused and turned to walk carefully back a few steps. Then set the stake down into the ground about 20 yards away from Mahesh.

“This is about as far as I can go!” Cliff hollered over at Mahesh.

Mahesh looked around and noticed that they were in the middle of a ring of small stakes that surrounded an indent in the ground that had filled with water from the rain over the past few days.

The city that surrounded them was a wreck. Entire buildings utterly destroyed by the raiding armies who had come seeking the spaceship. The governor and mayor had claimed that they didn’t know where it had gone. But the raiding army didn’t believe them. They had razed the city looking for it.

Mahesh chuckled at the irony. Not at the destruction, but the fact that the ship had been right here the entire time. If his calculations were correct and the power packs really could tell them where it was, then the ship was somewhere nearby.

He didn’t have much hope that they would find it intact though. It had most likely been destroyed by the bombings along with the buildings that surrounded them.

“Okay!” Cliff shouted. “Ready when you are.”

Mahesh reached down and pressed the large, round, orange button on the power pack. It hummed to life and began to crackle. He took a step back and adjusted his suit. Then straightened his gas mask as he waited to see what would happen.

Cliff gave him a thumbs up from across the puddle. A bolt of blue lightning snapped up from the ground to the side. Both men jerked back from their power packs. Cliff took a step back from the puddle of water and moved to the center of the small, dry area that surrounded him.

More bolts of energy began to sizzle and snap around them. A loud humming sound filled the air. Cliff shifted nervously. Mahesh could tell that he wanted to run.

“Stay close to the energy pack. That’s where you’ll be safest.” Mahesh reassured his friend to keep him from bolting away.

A large ball of white light began to form in front of them. Dirt and leaves began to float up into the air. Even Mahesh felt his body grow lighter under the strange power that surrounded them.

He glanced up and noticed the large, black ship floating down from the sky. Mahesh pointed up for Cliff to notice.

“There it comes,” he said softly.

“No wonder they never found the ship before,” Cliff whispered in awe. “It wasn’t in the city. It was floating up above.”

They both stood in silence as the ship continued to descend. Blue energy continued to arc up from the ground to an invisible shield that seemed to vibrate around the dark vessel.

The craft got close enough for him to see the intricate details. The blue lights along the edges flashed and flickered in sync with the bolts of energy shooting up from the ground.

It was close enough that Mahesh could almost reach out and touch it. He hesitated for a moment, but couldn’t resist even though he half-expected a shock.

There was a quiet hissing sound and a door opened from underneath with stairs leading down to the ground. Mahesh ducked to see if anyone was coming down. No one appeared.

“What do we do now, boss?” Cliff asked, his voice quivering.

Mahesh answered excitedly, “I guess we go for a ride.”