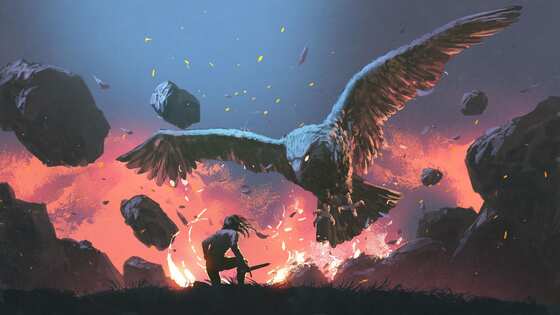 Reizko crouched low behind the boulder and waited patiently for the opportunity to make a run for it. The flames from burning rock in the valley below him flared brightly into the night sky, but the heat didn’t bother him.

His companions watched from a safe distance. The heat was still almost unbearable from here. The suffocating wind blowing sparks and ash in their direction caused them to squint their eyes and cover their noses.

They wanted to turn away but couldn’t tear their eyes away from their fearless leader. As much as they wanted to accompany him, they could go no further.

Legend spoke of those like Reizko who descended from his family line who could walk through fire. Some said that they descended from an ancient line of dragon warriors.

His skin seemed normal, but the heat didn’t bother him. And he rarely bled in battle. They had seen him take blows that would have torn a normal human asunder, yet swords glanced off him like a child’s toy.

The long-haired warrior simply laughed it off and said it was his quick reflexes and sharp wits that had kept him out of harm’s way. But they had fought close beside him in many battles and knew there was something different about him.

Reizko saw a dark shadow in the sky circling in his direction. He turned to glance back at his men. He wanted to shout a warning but didn’t dare give his position away.

A silent motion with his hand would have to suffice. He hoped it was enough for them to see in the low light reflected in the smoky air.

The dark blur circled a few more times in the distance before veering back into the shadowy clouds of the night sky. Reizko hunched low behind the boulder until the shadow disappeared.

He waited for another minute to be sure it was gone. Then slid out from behind the boulder and dashed quickly to the next. Reizko moved swiftly and silently from one to the other. Zig zagging carefully across the rocky field toward the lava river flowing below.

Reizko made it to the edge of the boulder field and peered down toward the glowing orange and red river flowing past him below.

He could see the creature he had been tracking . There were three of them now. Reizko growled quietly under his breath. He had been sure they were only following one of these things. It must have met up with more of its kind.

It would prove to be more difficult to regain the Amulet of Banishment that had been stolen from the king’s treasures three days before.

The king had been reticent to tell him for what purpose it served or why it was so important. But Reizko could tell from the king’s demeanor and the desperation in his voice that it held great value.

He watched and waited as they jabbered away and two of the foul creatures slinked off toward a small hole in the rocks. The third stayed outside under the night sky as if guarding their cave.

Eventually, the lazy guard leaned up against a rock and set his weapon to the side. Reizko moved stealthily forward. Weaving his way around till he came out behind the snoozing creature.

He couldn’t bring himself to kill the sleeping being. It seemed too humanoid even though it wasn’t like him and his fellow men.

Reizko picked up its spear quietly so that the hideous creature couldn’t use it on him if it woke up. He crept toward the cave entrance and crouched to get through.

The warrior flattened himself against the wall so he wouldn’t stand out in the entrance against the night sky as he waited for his eyes to adjust from the glow of the lava river outside to the darkness inside.

Soft snores emanated from a short distance away. Amplified by the walls of the cave, it sounded like they were directly in front of him.

But after a few moments, his eyes could make out their dark shapes stretched out against the back wall of the short cave about twenty feet away. He now recognized the scent he had been using to follow this creature. Only in here, the foul odor was almost unbearable. Reizko tried not to gag.

Their bags lay in the space between them. The Amulet of Banishment on top in plain sight just as the king had described. A large turquoise jewel about the size of his palm wrapped in unpolished silver connected to a thick black cord.

Reizko breathed a size of relief that he wouldn’t have to dig around or search for it. Or worse, that it was wrapped around their neck.

A bit of gravel crunched in the sand underneath his feet as he stepped forward. Reizko crouched to make himself as small as possible as one of the creatures stirred from his sleep. But it rolled over and began snoring again.

A few more steps and Reizko had the Amulet in his grasp. He moved as quickly as he dared, barely breathing until he was safely outside.

Circling back up through the rocks and boulders, Reizko could see his men still there waiting for him. He lifted the large purple Amulet triumphantly over his head for them to see.

Reizko turned just in time to see a giant eagle swooping in with its claws outstretched. The warrior leaped to the side and pulled his sword from its sheath to meet the oncoming feathered fiend.

He swung at it, but the eagle swerved mid-air. The blade sang as it sliced through the air, but feathers brushed over it softly as the eagle wrapped one of its giant claws around Reizko’s waist. It’s wings beat wildly against his head as the monstrous bird lifted him into the air.

The warrior raised his sword to hack at the eagle’s leg but clattered uselessly against the solid, yellow scales.

The sharp clang of steel rang solidly through the sword and vibrated down into his forearm. His hand went numb and Reizko’s grip loosened from the pain.

He watched the sword drop to the ground below. His friends rushed forward valiantly through the heat to help him, but it was too late. The bird was already out of reach.

They stood watching the eagle lift Reizko up from the earth and carry him away as their arms shielded their faces from the heat.

The men watched helplessly until the darkness swallowed up the eagle clutching their fearless leader. Gogi bent down to pick up Reizko’s sword.

He almost missed the amulet half-buried in the sand. The swirling dust and pebbles from the beat of eagle’s wings covered most of it. But a gleam from the jewel’s shiny side caught Gogi’s sharp eye.

He snatched it up quickly and glanced around to make sure that none of his companions had seen it before sliding it into his pocket.

Gogi didn’t feel sad like his fellow companions. He had long envied Reizko and now had the chance to step forward to take his place.

“Farewell, Reizko!” Gogi chanted with the other men holding their hands over their hearts to salute his bravery. “May the eagles carry your soul into the great beyond, and may your campfire blaze brightest among the stars in the night sky.”