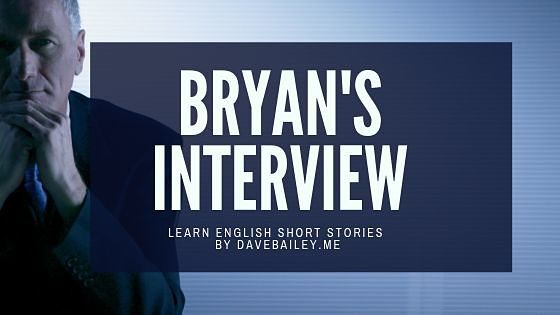 Hello! Here is a new Learn English Short Story for you to improve your English speaking skills. Watch the video and listen to it several times. Make sure to use each of the 7 steps from the Integrated Learning System to develop each of your core skills. Then practice your English speaking by retelling the story to your friends.

There was a man from India who went to live in the USA. He was a researcher and university teacher. His name was Bryan Gupta.

One day, he woke up in hotel bed at 7:40 a.m. He didn’t know why he was there and his head was pounding. After a bit, he did remember that he had an important interview that day. So, he got up to take a shower.

Then he got dressed and had continental breakfast down in the hotel cafeteria. He noticed that the hotel employees were looking at him strangely. But he ignored them.

After breakfast, Bryan caught a taxi to the interview. When he arrived at the building, he told the secretary who he was and why he was there.

She looked surprised and asked him several questions. She wanted to know how to spell his name and then wanted him to confirm his address.

Finally, the secretary asked him to have a seat while she made some calls. A man arrived and broke some terribly shocking news.

Bryan had come to his interview a week after it had been scheduled. But what was even stranger was the fact that the man told Bryan that he had already come in for the interview one week earlier.

Bryan asked how the interview had gone. The man told him that it had gone very well and had even been hired. But then Bryan had never showed up again. Someone had told the company that Bryan had died.

Bryan felt like he was in an episode from the Twilight Zone. He had the strangest feeling of Deja Vu.

The man told Bryan that he was very sorry, but someone else had been hired for the position. Bryan was very sad. Now he would have to find another job.

Listen carefully each question and then pause the video to answer it in your own words before hearing me tell you the answer.

Here are the questions from the video below. I did not add the answers because that would make things to easy for you. Right? But you can see them in the video above or see the answers in the PDF.

#3) What time did Bryan wake up in the hotel?

#4) Where did he have to go that morning?

#6) Who was looking at him strangely?

#7) How did he get to the building where his job interview was scheduled?

#8) When was Bryan’s interview scheduled for?

Here is a short dialogue between Bryan and Mr. Grant’s secretary. Listen and repeat along with me to practice your English speaking skills.

Secretary: Who are you exactly?

Secretary: And how do you spell that?

Secretary: No, I mean your first name. Do you spell it with an I or with a Y?

Secretary: Did you say your name was Bryan Gupta?

Bryan: Well, my first name is actually Mandeep. That maybe the name you have in the system. But Bryan is actually my middle name, and it’s the name I go by here in America.

Secretary: Could you just confirm your address for me?

Secretary: Right. Sure, I’m…well, actually, the truth is that Mr. Grant won’t be able to see you today. I don’t have anything on his agenda with your name on it.

Bryan: Please, check again. I’m sure there’s been a mix-up. I called to confirm this appointment a few days ago.

Secretary: Well, I do apologize, sir. But Mr. Grant really won’t be able to see you today.

Bryan: Oh, c’mon. For crying out loud. You have got to be kidding me. What a total disrespect of my time. Why didn’t he just let me know in advance?

Secretary: If I may ask, Mr. Gupta, what day do you think this is?

Secretary: It is Monday, sir, but it’s not the first of July. Would you like me to try to reschedule a meeting for you?

Bryan: Well, what day is it exactly.

Secretary: Monday, July eighth. I’m afraid there has been some sort of mistake. I do see you name here for an appointment last week.

Bryan: What am I going to do now?

Secretary: Well, have a seat and let me make some phone calls to see when I can reschedule you.

Here are 10 vocabulary phrases that I selected from the mini-story to explain the definitions. You’ll notice that most of them are in the past tense. Listen and repeat along with me to improve your English vocabulary skills.

Woke Up – To Stop Sleeping And Become Aware And Active Again

Got Dressed – Put Clothes On Your Body

Told Her – Communicate Information, Facts, Or News To Someone

Made Some Calls – To Use The Telephone To Talk To People

Broke The News – To Share Some Important Information With Someone

Listen to these 35 question and answer phrases about how to ask someone’s name in English. These are not in order. They are just different ways of ask the same question so you can understand native speakers who talk with you.

Repeat and practice your pronunciation with me as many times as you need.

Hello! And welcome to Z4 Technologies Inc.
How can I help you?
What can I do for you?
I have an appointment this morning.
I have a meeting with Mr. Grant
I have an interview scheduled for 9:00 a.m.
Okay. What’s your name?
And you are?
Could you please tell me your full name?
What’s your first name?
Tell me your last name please?
My name is Bryan Gupta
I’m Bryan. That’s Bryan Gupta.
It’s Gupta. Bryan Gupta.
Do you spell that with an I or a Y, Bryan?
How do you spell that, Mr. Gupta?
Is that spelled with a TH or just a T, Mr. Gupta?
I’m sorry. I didn’t quite catch your last name.
Could you please repeat that for me?
Hm. I don’t see any interviews on his schedule.
Sorry, I don’t see your name on his agenda.
That’s strange. Mr. Grant doesn’t have any interviews scheduled for today.
Are you sure your interview was scheduled for today?
Yes, I’m absolutely positive.
I even called to confirm it yesterday before 6 p.m.
Could you please double-check his schedule?
Sure. Oh here it is. I must have missed it.
Yes. I do see that you have an interview scheduled with Mr. Grant this morning.
Unfortunately, Mr. Grant is running late though.
His pilot is running about 30 minutes behind.
There was a 25 minute delay at the airport because of the rain.
He asked us to push your meeting back 30 minutes.
Mr. Grant apologized and asked to reschedule your meeting for this afternoon
Would it be possible for you to return at 4:30 p.m.
I also have an opening for 5:45 p.m. if you prefer.
Or would you rather reschedule for tomorrow at 9:45 a.m.?