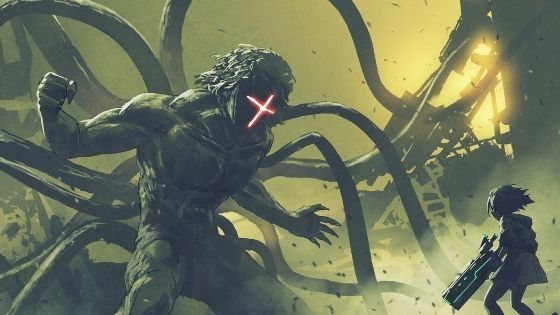 Tora heard the noise before she saw him. Loud crashing. Shattering glass. Crackling flames. Terrified screams. She rounded the corner and looked past the mounds of destruction that littered the street. Tora paused before pressing into what was left of the large building before her.

The girl could barely see through the smoke and dust that floated down around her. She squinted against the burning in her eyes as she looked around for the beast.

At first, she could only see the hazy light of the sun trying to press its rays through the suspended debris into the interior of the building.

Tora’s eyes slowly adjusted to the scene around her. Her nose began to itch from breathing in so much pollution through the contaminated air. She scrunched up her nose at the smell of burning plastic and pulled her hoodie around to cover her mouth and nose.

It was too late. Tora felt a sneeze coming on. She squinted and pressed her finger under her nose while holding her breath, but it was no use. Her sneeze echoed loudly through the silence in what was left of the building.

Something rustled overhead. Tora glanced up into the shadowy darkness to the floors above and watched a large dark shape falling in her direction.

Hyacinthe landed with a resounding thud in front of Tora. The tentacles flowing from his back cushioned his drop from the building above. Tora took a step back but kept her weapon pointed down so the giant beast wouldn’t take her for a direct threat just yet.

“Stop it, Hya!” she barked out an order as one would to a disobedient puppy. “It’s time to go back home.”

Hya growled. Tora felt the sound reverberate deeply in her chest just below her throat and in the spine at the base of her neck. It still gave her chills when she heard it, which wasn’t often. Hya rarely made any kind of noise. Much less something that loud and menacing.

Tora managed a smile even though the sound unnerved her.

Hya growled again. Then snorted. He crouched down and exhaled furiously.

The girl looked around at the destruction and havoc that Hya had ravaged on the buildings that surrounded them. She could see a few survivors peering out from behind the rubble where they had managed to hide and stay safe during Hya’s rampage. Someone had pulled out a cell phone to film what was going on. Tora needed to deal with them and then get Hya out of here quickly.

The petite girl took a step forward toward the towering figure before her and stretched out a hand. Her light footsteps in the concrete rubble barely making a sound.

Hya hissed loudly and took a step backward. Unlike Tora, his huge foot crunched loudly as it shattered bits of rubble on the ground around him.

“Don’t touch me, child,” he growled. His giant fist balled up and ready to crush her.

Tora sighed and looked around at the destruction he had already caused. She was already in so much trouble. The girl thought about calling for backup, but she didn’t want to have to get anyone else involved. If she could deal with Hya by herself, they might not think she was so incompetent. Even though this wasn’t all technically her fault. Hya had done this to himself. But they wouldn’t see it that way. She would most likely end up becoming their scapegoat for this whole mess.

“So, you’re okay?” she asked. “You know who you are and what you’re doing here?”

Hya growled. “Of course I do. Did you think I’d gone mad or something?”

Tora looked around at the destruction he had caused. She bit her tongue at the sharp retort that was oozing its way out of her.

“You had me worried for a bit. What exactly are you trying to accomplish here?” Tora said instead as she walked over to the man with the phone. He ducked down and covered his head with his arms. Tora yanked the phone out of his hand. Let it drop to the floor and stomped on it. The screen cracked, but she was too small and light to crush it as she had intended.

“Just making a statement,” Hya replied. “So, that they know what’s coming.”

“Well, I think you made your point clear enough,” the girl said.

Tora kicked the phone off to the side and pointed her gun toward it.

“So, what’s the next step in your plan.” The girl asked as she pulled the trigger. She held the trigger longer than necessary. Letting the irritation she felt over this whole situation ooze out through the barrel.

“I don’t know,” Hya admitted. “I haven’t thought that far ahead.”

“Well, you have to think these things through,” Tora snorted. “You can’t just do things impulsively and expect to get the result you wanted. Especially if you don’t even know what you’re trying to accomplish. What do you want out of this?”

Hya shrugged and looked around at the mess he had made. “I guess to make them pay.”

Tora cocked her head to the side and scowled at him.

“Knocking down a few walls isn’t the payback they deserve for what they’ve done to you. All you’ve made yourself a target. They’ll see you as a threat and come after you.”

Hya shrugged and looked down at the floor sheepishly. “I was just so angry at them, Tora.””C’mon,” she said softening her voice. “Let’s get out of here. I’ll take you somewhere safe for now.”

“Thanks, Tora. You’re the friend I can always count on when things get tough. Here, let me give you a ride.”

Hya wrapped her gently with two warm tentacles placing her up on his back as he prepared to leap back up into the smokey darkness overhead.