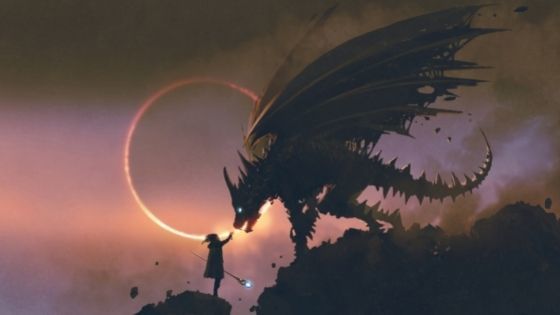 Jie crouched behind a rock. He peered into the darkness. Watching the magnificent creature before him. His heart beat faster as it came closer. The boy tried to calm himself down. But it was almost impossible.

The darkness in the cave was oppressive. He was already having trouble breathing, and the hot, heavy air made it even more difficult. Jie wanted to stand up and stretch. But that was out of the question right now unless he wanted to be seen.

The scaly creature moved silently across the rocky surface. Choosing its path carefully. It never made a sound. Jie wondered how such a large, bulky creature could move so quietly through the darkness over the broken surface.

Jie gripped the staff in his hand more tightly. He waited silently as the beast moved steadily toward him. He was amazed that up until now, the animal had made no sound at all.

In a large chamber like this, the slightest scrape of a rock would have echoed loudly, breaking the thick silence that permeated the air.

Jie slowed even his breathing. Afraid that the faintest sniffle might alert the scaly creature to this presence. The beast stopped and craned its neck forward. It lowered its back and stretched out its large, leathery wings.

The immense range awed the young human watching it. Jie could barely believe what he was seeing. He wanted to reach out and touch them. To actually feel the leathery scales for himself.

The fabled beast was so close. Just a few steps away from him.

Jie knew that it was searching for him. He could sense it straining in the darkness. Trying to figure out what was going on.

He gripped the staff in his hands more tightly. It was the only thing that kept him from being discovered. Or so he thought.

“Step forward. I have been waiting for you. Why do you hide behind a rock like a frog?” the great beast hissed.

Jie’s heart skipped a beat. He lowered his head and tried to make himself smaller. Wondering if he had heard correctly. Did it really know he was here? Or was it talking to someone else?

No one else answered. The silence in the air thickened.

The only part of the creature that Jie could still see was its tail sticking out from behind the rock that he was crouched behind.

The tail swayed slowly from side to side.

Jie raised his head a little. Following the rough outline of the creature’s back and wings. He couldn’t quite tell if it was looking in his direction. He half-hoped that someone else had followed him in here.

Maybe the monster was referring to another person. And yet it was here, just on the other side of the rock that he had chosen to hide behind. It would be too much of a coincidence.

Still, the creature waited on the other side of the boulder that stood between them.

“Are you talking to me?” Jie whispered softly.

“Of course, silly. Who else would I be talking to in here? It’s not like a get many visitors down here.”

Jie stood slowly to his feet. He grasped the staff more tightly and held it out in front of himself for protection. He couldn’t help but notice that the glow from the tip of his staff matched the bluish-white glow in the dragon’s eyes.

A low, throaty rumble came from the creature’s chest. Almost as if the beast were laughing at him. Jie felt slightly miffed and frowned.

“Did you really think you could control me with that thing?” the dragon asked.

Jie shrugged. His face burned with shame. The question made him feel stupid. However, in his defense, the old man that told Jie about the staff had made it sound like this was a powerful magical item that could control magical creatures like dragons.

“Dragons are too powerful to be controlled by such puny devices,” the beast rumbled. “We control everything and everyone around us.”

Jie didn’t like the arrogance in its tone of voice. He wanted to do something to put the creature in its place. But, he didn’t feel comfortable correcting a giant monster in a dark cave. So, Jie kept his mouth shut. He simply bowed his head and apologized.

“Come, Jie. I brought you here for a reason.”

The man jerked his head back upright. How did the creature know his name? And why had it brought him here?

Jie followed the dragon back across the rocks until they came to an abyss. A great, dark chasm that yawned out into the blackness. He couldn’t see where it ended or how deep it went. He looked over at the dragon beside him that was now leaning back on its haunches.

“You have done well, little one.”

The words irked Jie to no end. He was getting fed up with this dumb dragon and its patronizing lines.

“What have I done well?”

“Completing the missions that I assigned you.”

Jie looked at him blankly. His mind whirling. Trying to process the information.

“What, silly human. Did you really think that staff would control me? I had you bring it because I needed it. I need it. We need it.”

Suddenly, everything fell into place and began to come together for him. The old man that told him about the staff. Everything Jie had been through to find it. This creature here had orchestrated it all.

Now, Jie only had one burning question.

The dragon turned and smiled in a dragon kind of way.

“This is only the beginning. There is so much yet to come.”

Jie hated these stupid responses to his questions that never provided any real answers. He wanted to throw the silly staff over the edge of the abyss and walk away. But he really did want to know. And he had already invested so much time into getting here.

Meeting the dragon who had orchestrated it all, seemed to be a nice reward for his effort. So, he decided to play along.

Jie sat down and threw his legs over the edge of the chasm. He let them swing there over the darkness.

As much as he didn’t like some of the events, it wasn’t so bad Jie figured. Meeting a dragon was a nice reward for his effort. Even if he didn’t like the dragon’s personality.

“It’s okay. I don’t like you much either,” the dragon said.

Jie blushed in the darkness. No one had told him that dragons’ could read minds. He swung his legs nervously over the abyss and tried to keep a blank mind. But it wasn’t working very well. A million thoughts flitted through his head.

“Relax, human. Enjoy the moment. Soon, you will know more than you wished you did.”

Jie wondered what that meant. But realized that like all of his adventures thus far, he would just have to take it one step at a time and wait for all the pieces of the puzzle to fall together.