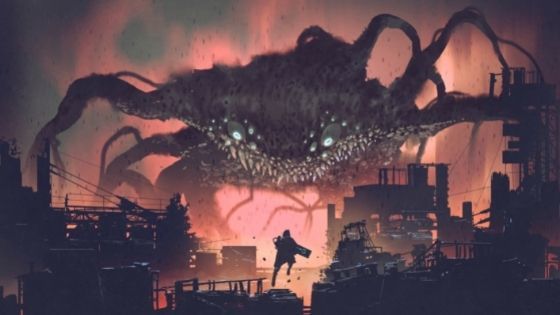 Spartak floated slowly over the ruined buildings of the city below him. He drifted in the direction of the giant monster. Careful not to make any sudden movements that might set the creature off. He tried to keep his nerves under control.

The man knew that he could fly off quickly in retreat if needed at any second, which was a relief and temptation at the same time. He desperately wished he could. Every fiber of self-preservation in his body screamed for him to get to safety before it was too late.

But Spartak knew that was out of the question for now. The fate of the human race depended on him and how he handled himself now.

The great, hairy beast continued to forage through the rubble below. Searching for its next victim to eat. BowelTeeth was what the news reporters had named it when it first appeared because of the innumerous fangs that protruded from its mouth and covered its enormous underbelly.

Although most people were pretty sure that those weren’t real teeth on the outside of its body, no one had actually gotten close enough to confirm what those things were. He just hoped that they weren’t eggs that the monster was carrying around until they hatched.

Spartak could hear the screams of those who hadn’t managed to get out of the building before it was knocked down by the horrid creature. He tried not to look down at the tragic sight below him.

His instincts as a former firefighter to try to rescue someone was intense. However, there was nothing he could do to save them by going down to their rescue. He needed to keep his focus on the task at hand. Killing this monster.

BowelTeeth suddenly stopped foraging for food and shifted its attention in Spartak’s direction. Twelve pairs of eyes turned to gaze at the strange sight of a human floating towards it.

Spartak slowed his forward momentum. The creature had stopped foraging for humans in the wreckage below. Its eyes focused on the human before it. The man came to a complete stop. He floated silently in the air. Unsure of what to do.

The giant monster lifted up one of its long, scrawny legs and poked a tendril out in his direction. As it moved toward him, Spartak backed away as quickly as he could. The man swung the massive weapon in his arms toward the creature’s leg.

Spartak continued to wait though. He managed to keep his nerves still enough to keep from pulling the trigger. The leg stopped before it actually touched Spartak. It held its leg still as if waiting for him to do respond or do something. Almost as if it were testing him.

The human finally reached out a hand. He pulled off his glove and stretched it toward the hairy tip of its leg. The stiff bristles wavered in the air. Pulsing and wafting gently, even though there was no wind. Almost as if it were analyzing him.

He waited quietly to see how it would react. Never moving the barrel of the gun away from it. Spartak kept the gun pointed at it the entire time.

Finally, the floating tendril moved forward a few inches. Then it stopped as if waiting for him to take the next step. Spartak waited quietly. He didn’t pull away. But he didn’t move forward either.

BowelTeeth pushed its tendril forward another half inch. The hairy bristles continued to pulse and wave in a back and forth pattern as if it were sniffing him. It moved forward a bit more with each pass until Spartak felt them tickling lightly across his palm.

Spartak pointed the gun a few feet up the leg. Just in case it did try something and he had to shoot, Spartak didn’t want to shoot himself accidentally. He was ready to blow off its leg and then turn the plasma blaster up into its face.

Dr. Garen had given him the weapon earlier that day. Spartak had never seen anything like. But Dr. Garen had assured him that it would blow the creature apart if needed. All Spartak had to do was get close enough to do some real damage.

Spartak figured this was close enough to do whatever damage Dr. Garen intended. But he still couldn’t bring himself to pull the trigger. He felt a strange sort of bond to the monster. A sense of camaraderie and kinship. He continued to wait to see what the beast would do.

The human waited silently for the monster to make the next move. He was ready for it. But in the end, BowelTooth drew its long, wriggly tendril back away from him. Then the monster turned and began to walk away in the direction it had come from.

Spartak followed it as it made its way back to the hole from where it had come from. Then it wriggled its way back in and disappeared from sight.

Dr. Garen and General Rouben were not happy when he returned to the base. They demanded to know why he hadn’t taken a shot at the creature, but Spartak just shrugged his shoulders. He couldn’t explain it.

He knew there was more to this than met the eye. There were things going on that he was not yet classified to know about. Like how they had given him the ability to float. Or where they had gotten the plasma gun with the strange symbols all over it.

But for now, he didn’t care. He had done what they sent him out to do. Stop the carnage and destruction. The monster had left the city for now. And the most important thing to Spartak was that he was still alive.