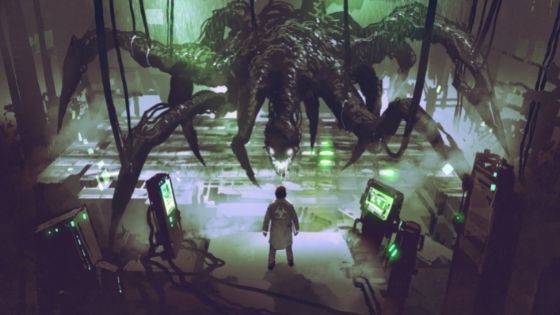 Maxamed stepped slowly into the room. His jaw dropped and his mouth fell open at the scene before him. The door started to slide closed behind him. He twisted his body around and shoved his foot in the crack before it could close. The clipboard he had been carrying in his hand clattered to the floor.

The door slid open again, and the scientist could barely leap back into the hall fast enough. After the door had closed, Maxamed leaned up against it, still panting. He finally caught his breath and turned back around to peek through the window.

The scientist blinked several times and rubbed his eyes to see if what he was seeing was really real. He finally opened the door again slowly. Watching to see how the thing would react.

Maxamed finally took a tentative step back inside. He picked up his clipboard again and walked forward slowly. Placing one foot carefully and silently in front of the other.

The great beast finally stirred. It turned its head slowly in his direction. Its eyes widened when they saw him. They glowed white.

The scientist took a step back in the direction of the door. Ready to flee if necessary.

The large, slimy creature focused its eyes on the scientist standing before it. It opened its mouth and hissed loudly. The same white glow in its eyes also filled its mouth. A bit of it drooled out of its mouth and hit the floor. Maxamed half expected the saliva to burn through the ground like acid. But it didn’t and he breathed a sigh of relief.

Maxamed must have stood there between the green-glowing screens that monitored the beasts vital sight for at least two solid minutes before he thought to check them. His fingers flew rapidly across the controls as he tried to analyze what had happened to the creature during the night.

How did it grow so rapidly during the night without anything to eat?

Yesterday, when they had brought it into the lab, it hadn’t been much bigger than a large dog. And now its legs spread out across the entire room. The same legs with sharp-pointed ends that were tapping slowly across the room in his direction.

Maxamed pulled out his phone and called Dr. Chisomo. He let the phone ring several times, but became impatient and hung up. Next, he tried dialing his lovely assistant, Ogechi. But she didn’t answer either. The scientist sighed in frustration and went back to analyzing the data on his screen.

There was so much strange data running through the system that didn’t make sense. Maxamed couldn’t make heads or tails of all the information.

Maxamed glanced over briefly at the wires connecting the creature to the system. Everything seemed to be hooked up correctly in spite of its enormous growth. They had managed to stretch enough not to break. But by the looks of things, they wouldn’t last much longer if the monster kept growing at this rate.

The scientist pondered it thoughtfully. At the rate it was growing, it would soon be too small for this room. He wondered what they would do then. Bringing it in yesterday had been a piece of cake. But now, there wasn’t an easy way to move this beast somewhere else.

The creature struggled to move around and pulled itself up onto its long, pointy tipped claws. But it wasn’t able to get a grip on the hard floor. It wobbled around before settling back down.

Maxamed sidled away from it a bit back toward the consoles to see what he could figure out. He was still there busily tapping away at the screen. The scientist didn’t see the creature’s neck stretching out slowly and silently in his direction. Nor did he see one of the long claws coming up from behind him toward his feet.

When he did notice them, it was already too late. The creature’s claw was pulling him into its waiting outstretched jaw. And only then did Maxamed have his epiphany and realize what had happened to Dr. Chisomo and Ogechi.

Why they hadn’t answered their phones. And why the data registered so much strange activity at the times they had arrived. Now, the creature’s rapid growth made sense. But for Maxamed and his colleagues, it was already too late.