Take Over The World – Dave Bailey
0 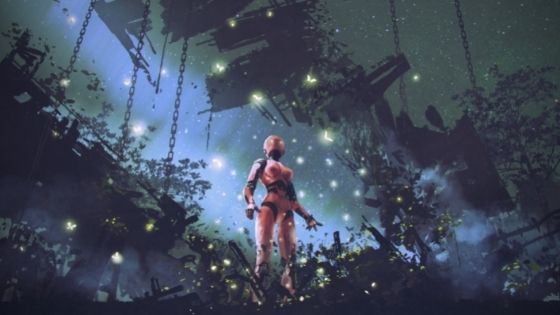 Take Over The World

The small, light form floated in front of my eyes. Silently hovering. It was too close to focus on. I squinted for a better look. A butterfly? A dragonfly? I couldn’t quite make out what it was. I scanned through all the words I knew, but couldn’t come up with anything to describe this strange form.

I pulled my head back to give my eyes room to focus. I gasped. Pulled my hand up over my mouth and giggled. It looked like a small woman. With wings. What was this strange thing?

The small creature tweeted brightly and floated in closer to my face again. She went out of focus. She tweeted a few more times.

“I’m sorry. I don’t understand what you are saying. Are you trying to tell me something?” I continued pulling my head back to get her back into focus. She wasn’t much more than an inch away.

I held up a finger to push her back. She buzzed right around and flew back in closer. Tweeting wildly now. She was starting to get irritating. She sounded like a mosquito. I wanted to squash her like one too.

“Hey, back off. You’re too close. I can’t see you correctly.”

I put my whole hand up in front of my face and pushed her back. She was light. Like a feather. Floating around before me.

She came back around, but this time she floated past my eyes to the side of my head. It felt like she was blowing down my ear. It tickled. Like when your nose tickles, and you want to sneeze. Only I couldn’t sneeze through my ear, of course. I just shook my head and tried to get her out.

Suddenly, her tweeting stopped and became words that I could understand.

I felt the flutter of breeze again in my ear as she flitted her way out. I shook my head again. Rubbed my ear and wiggled my jaw around to get the itchy feeling out.

Cedarmist floated back around the side of my head and into view.

I could have slapped myself. That was a goofy thing to say. It was impolite and probably offended her.

“Of course, I can talk,” she replied. “You’re the one that couldn’t talk with me before. I had to make you understand me.”

I frowned at that. She wasn’t making sense.

“What do you mean?” I asked bluntly. “I’ve always talked.”

Cedarmist giggled, “No, you haven’t. I just created you.”

The little ball of light in front of me shimmered and shined.

“What’s the last thing you remember?” she asked.”Do you have any memories before this?”

I paused and cocked my head to the side. I tried to remember something before just now. Anything at all. But no memories came.

I started to breathe heavily. I felt like walls were closing in on me.

“What’s going on?” I demanded angrily, trying to control the panic that started to well up inside of me.

“I just told you. I created you. This is your beginning.”

“My beginning,” I heard myself mumble.

I looked down at my hands. They were hard. Plastic-like. But the tips of my fingers were soft. I could feel my hard forearms as I ran my fingers up them.

The dark seams where my joints should have been seemed strange. Like they didn’t belong to me. They looked like something that belonged on a robot.

Robot. That was a word I had been searching for. But this was weird. I wasn’t a robot. I was a human.

“What happened to my body?” I demanded.

She shrugged. “This is your body. I gave you this body.”

“What do you think, silly?”

I shrugged. “I don’t know. I don’t remember a word that describes you.”

“What?” Cedarmist gasped as if the very idea that I didn’t know what she was offended her. But I couldn’t tell if she was genuinely offended or just being ironic.

I shook my head.

“Oh, c’mon. I’m a fairy, silly. I created you with a mix of my magic and my technical know-how.”

The word fairy didn’t ring a bell. But I did understand the word robot. I knew how they were created. And I knew they weren’t created by strange creatures that floated around glowing in the dark.

“I know what a robot is, fairy,” I growled. “And I know robots aren’t created by fairies because they are built in factories.”

Cedarmist rolled her eyes and flicked her tiny wrist. “That’s just semantics, little lady. But, yes. For whatever it’s worth, I didn’t create you. However, I did find you in this junkyard. And I did bring you back to life.”

“Well, you sure look like one to me,” Cedarmist said with a fake pout to act like she was offended.

“Because I wanted to create something great. Together we are going to take over the world.” she gloated.

I rolled my eyes.

“Whatever,” I said with a puff. “Like you could take over the world,”

She scowled and waved her fingers. Suddenly, I couldn’t move. I started to panic and tried to wiggle my way out. But nothing happened. I was frozen.

“That’s not magic. That’s just something you programmed into my system.”

“Ha! Then you admit that you are run by a program. Therefore you are a robot.”

“Fine, I’ll play along. I’m a robot, and you created me. Now can you let me go?” Please.” I scowled back at her while continuing to try to move.

“Not till you apologize,” she said.

“For what?” I replied in exasperation.

“For not believing me,” she said with a flick of her tiny head of hair.

Cedarmist waved her fingers, and I could move again. It felt so good. Like a relief from something terrible.

“And what are we going to be doing?” I asked warily.

“Oops! Tut tut! Don’t say a thing like that. Shhhh! Or I’ll have to freeze you again.”

And she did for a brief second. Cedarmist wiggled her fingers to pause me for a minute just to show me she could. Then wiggled them again to let me go.

“Oh, you have a choice. You can choose not to help me and stay frozen if you want,” she said with a big, fake smile that didn’t reach her eyes.

I wanted to reach out and slap her but immediately felt my body locking up again.

“It’s okay, sweetie. You’ll learn fast. You’re a fast learner. Much faster than the others,” she whispered almost sadly.

“Come,” she said, leading me across the grass almost against my will. “Let me introduce you to the others.”

I stood there under the dark sky, lit only by the stars. There was a large hole in the ground. I looked like an old cave entrance. At first, I thought stars were floating up from the ground. But then as they came closer, I could see they were other little fairies just like Cedarmist.

They all floated up and around me. Oohing and ahhing. I wanted to punch them. Slap them. Squash them all. But couldn’t lift a finger. I stood there in silence as they flitted around me. But I swore I would find a way to break their spell over me even if it killed me.

Magic or programming, whatever this was, I wanted to be free from it. I just needed to bide my time. Figure out what they had done to me. And then find a way to stop them.

“So. How are we going to take over the world?” I asked as innocently as I could.