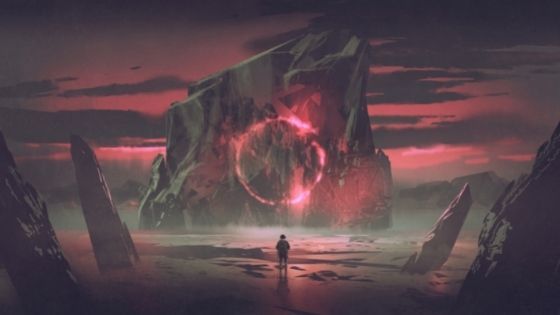 Dong moved quickly across the frozen tundra. He paused in front of a giant chasm that lay open before him in the icy wasteland. He paused for a moment to scan the landscape. Looking for the easiest and quickest way to get to his destination.

He panted heavily as he traced a pathway across the ice with his eyes. Then raised his weary eyes to look up at the massive iceberg before him. Dong let out a small sigh of relief. At least he could finally see his destination.

A large iceberg, solidly frozen into the tundra. Auseon, his final destination. The red ring glowing through the icy mountain let Dong know that he had finally arrived. He had seen it in his visions. it had been described to him those who guided him along the way.

And now, Dong was finally here.

The man had spent all this time sailing the known seas and crossing one continent after another to find this Ice-Crowned Pinnacle. A few more miles across the cold expanse before him was a delight. Dong was pleased to finally be here on the icecap. To finally be close to accomplishing his mission.

Only a little bit more, and he could destroy this cursed item once and for all. Then everyone in Auseon would be free. And he would be hailed their hero. Well, almost everyone.

Sure, there would be those who didn’t agree with what he was doing, but that was to be expected of those ignorant fools. Dong just didn’t get why they couldn’t see things the way he did.

Dong paused to catch his breath again. The air up here was much thinner than most other places he had been too. It cut through his nostrils and felt like razor blades were slashing into his lungs with each chilled breath.

He huddled behind a large, rocky outcropping that stuck out of the ice. Trying to block out the wind. Dong wrapped his scarf more tightly around his face. Trying to make it stretch farther so he could wrap another layer over his nose.

The man shifted the weight on his back. It wasn’t very heavy any longer. He had eaten most of his supplies. The last game he had seen to hunt had been three days earlier. Dong was running low on food.

But none of that mattered. He planned on being at the base of that iceberg before nightfall. Camp there if he had to. Then find his way inside first thing in the morning.

He readjusted the straps on his backpack and tugged on them to make sure it was still secure. The last thing he needed was to have it fall off if he had to make a run for the Ice-crowned Pinnacle.

Dong hoped it wouldn’t come to that. But who knew what could be waiting for him out there under the ice. He was sure that this place wouldn’t be left unattended. He gave one final pull on the straps.

The only item that really weighed anything was Greathelm, the Haxstine Crown. Or as he and his fearless team called it, the Malignant Casque of the Beast. It had to be destroyed once and for all before evil, corrupt people got there hands on it again, as they had before.

The man began moving again. Willing himself to push on through the wind and cold. His body screamed with agony at each step. He wanted to stop and rest for the night. But he could sense that it wasn’t safe here.

Dong had already survived so many attacks and escaped so many close calls, that he felt he had developed a sixth sense that let him know when something was about to go down.

And he felt it now.

There was evil out here on the ice. A dark, foreboding feeling that things would only get worse before he reached the glowing, red ring.

The red ring. That single thought spurred him on. He had to get there today. Before nightfall. No telling what kind of terrible, nocturnal creatures roamed these frozen lands.

If something happened to him out here, there would be no one left to destroy the Greathelm, the Haxstine Crown. It would lie out here in the frozen tundra for someone else to find and wield.

Why not simply put it on himself and command a dragon to come take him to the Haxtine Castle where it was safe and warm? Why not control the people to crown him king?

He would make just as good a ruler as anyone else. Maybe even better. He was strong. He could control his desires and keep them in check so that his heart didn’t grow corrupt as others had. Instead of destroying Greathelm and letting all that power go to waste, he could harness it for good.

Wouldn’t that be a much better objective then destroying it in the frozen fires of Auseon?

The insidious thoughts wound their way through his mind. Dong tried to fight them off. Up until now, he hadn’t ever entertained these kinds of ideas. But here, so close to accomplishing his mission, it seemed so futile.

The more he fought the idea, the stronger it became. The more powerfully the images of him ruling as king became.

Dong fell to his knees. He unstrapped the backpack and pulled it around. Pulling out Greathelm and rubbing it gently.

The man tried to remember why he was supposed to destroy something so powerful and wonderful. Why would he destroy the very thing that would allow him to help his people?

Maybe thee was a reason that the dragons and men had forged an alliance through the creation of Greathelm. Surely, they knew something he didn’t. Something that his peers bent on destroying it didn’t.

And all he had to do was slip it on his own head. Summon a dragon of his own. And achieve everything he ever desired.

Dong shoved Greathelm back into the bag and screamed at himself for not remaining faithful to his mission. But it seemed so bleak and futile now. Nothing would be obtained by the destruction of Greathelm he reasoned with himself. Men would go back to fighting among themselves for power.

This way, everyone knew who the rightful king was.

And who better to be the rightful king than himself.

Why not try it on? What could it hurt? He was right here near the Ice-Crowned Pinnacle. If he didn’t like it, he could still destroy it.

Dong slipped Greathelm out of the backpack. He placed it on his head. And suddenly everything made perfect sense.

Almost as if on cue, a giant, white, snow dragon climbed out from the crevice and knelt before him as if inviting him onto its back.

Dong climbed on and let it take to the Haxtine Castle. For the briefest moment, he wondered why it had been there. Had it been there all along?

But he quickly pushed those thoughts aside to plan how he would make his grand entrance into the palace. Dong wanted to gloat over his enemies and those who doubted for a second in life that he would amount to much.

Dong had command of the dragons. Dong had control of the people. Dong could do whatever he wanted. Nevermind that he had abandoned his mission.