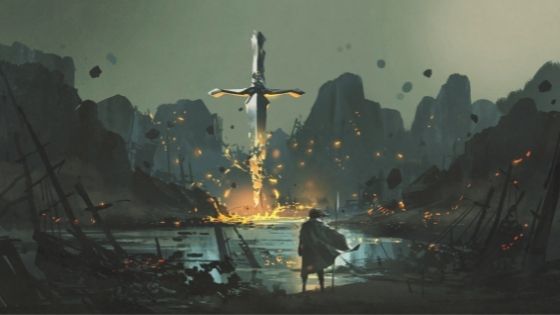 Fletcher stood at the edge of the lake surrounded by steep mountains. The edges of his thick, dark cape whipped and wafted in the warm wind that surrounded him. He gripped his spear tightly and tried to contain the emotion that surged within him.

Relief that the battle was over. Joy that he was still alive. Sadness over the senseless death of people he knew and loved. Nervous apprehension of what would come next as the world tried to pick up the pieces and carry on. A twinge of fear at the thought of returning to Alamorth once again. Guilt for having started this whole mess when he arrived. Anger at those who pushed him into it.

The thoughts swirled in his head like uncontrolled water flowing over the precipice of Niagra. The emotions raged through his cells like fire around the great phoenix’s feathers.

The stormy emotions raging inside of him began to subside slowly as he took several more deep breaths. He opened his eyes once more and looked around. Fletcher stood in awe of the destruction that had taken place around him.

The crackling sound of the flames licking and consuming what was left of the once-mighty vessels of a great army filled his ears. The smoky scent of burning oak filled his nostrils from the broken and burnt-out hulls of charred ships surrounding the edge of the lake. Or rather, what had once been the bottom of the lake.

It now lay dry and barren. Eighty percent of the water that had once filled this crater was no longer here. Turned to steam, most of the great lake’s liquid had been vaporized into the atmosphere by flames from the Sword of Alamorth.

Fletcher lifted his eyes to look at the sword in the middle of the lake. It had landed point down and sunk deep into the soggy, lake bottom. He watched in awe as the sword slowly began to disintegrate and self-destruct from the bottom up. And yet, it did not fall over or move. The sword continued to hover over the water and float silently in the air.

The flames and burning ash continued to waft off of it. Then it began to rise into the air. Loose rocks around Fletcher trembled and rose up slightly along with it.

He wished that it didn’t have to end this way. Fletcher had come so far on his journey searching for this mighty weapon. And now that he had found it, the sword was disintegrating and disappearing before his very eyes.

Fletcher had started this journey with the hope that once he found it and possessed it, he would become king of all the land as the legends foretold. But that didn’t seem to be the case now.

The thought crossed his mind that his motives had not been pure. The entire time, he had viewed the sword as a symbol of power and authority. An object to be obtained for his own gain. And yet now, the true meaning of the sword became clear.

It was for the best that it be returned to its rightful place. Far from the grasp of corrupt and greedy men who would try to manipulate it and wield it for their own evil purposes. Men who would use it to control their fellow members for their own selfish ends.

Fletcher smiled at the thought that he had come full circle. He had left his tribe out of anger at his chief’s greedy and corrupt actions. And yet, he had no doubt that he would have been tempted to do the same if he had been in his shoes.

He reflected on the fact that over the course of his journey, his hope and belief had become blurred through his own desire for power which would have taken him down a destructive path.

The last bits of the sword’s handle disintegrated into bright bits of ashes and smoke. Fletcher raised his spear in a final salute. Grateful that the sword had saved him and his people. He had given it up to save the lives of those he loved. And it had been worth it.

He wondered what would have happened if he had chosen a different path. If he had run off with it, instead of using the sword to save his people. Would it still have been given him if he had done that? Had this all been a test?

Fletcher shook those questions out of his mind. He would never know. But he did know that he had made the right decision for himself and those he loved. He smiled wanly to himself and turned to leave the destruction behind him. It was time to head back home.

Thank you for reading! If you have questions about any of the vocabulary words, ask them in the comments below. Give me your feedback and tell me which stories you like so I can write more of them.