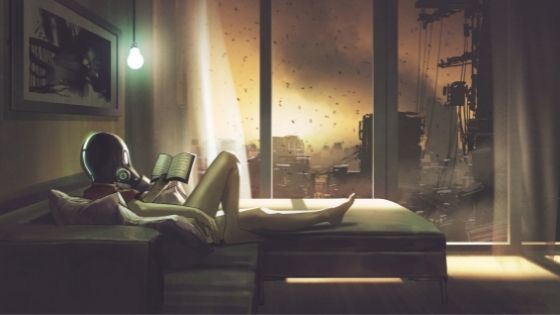 Sayaka grabbed the book from the table and threw herself on the sofa. She sighed at the scene outside the window.

Two months of non-stop smog. Was it never going to end?

She longed for the days when she could open the doors to the patio and take a deep breath of fresh air. She missed being able to go out for a long walk on a sunny day.

Now, everything was dark and dreary. The sun hidden behind the never-ending clouds of billowing smoke and ash. No one knew where it came from or what caused it.

The young lady wondered what had happened to the beautiful touristic attractions around her city.

The Bamboo Forests. The Three Frog Throat Waterfalls. And even the Mountain of Ancient Dragons that she could once see from her home.

Now, most likely, devastated and decimated by the onslaught of dirt, grit, and grime that probably covered them just like it did the entire city.

Sayaka had no idea where her family was either. They had left her at home for the weekend and gone on a short trip to visit relatives in a neighboring city. She stayed home because she had to work that day.

After finishing, Sayaka had planned to catch the five-o’clock train. At noon, however, storm clouds began to gather over the city and a strange, black drizzle began. It came down as thick goo similar to oil and didn’t stop until well after dark.

She was not brave enough to venture outside until it stopped. So, Sayaka missed her train. She didn’t even want to leave the building after the rain stopped. She didn’t like the look of it and knew something was wrong.

Most everyone else hadn’t been so lucky. Many came down with a strange illness. Most died in less than a week. No one that had gone out in the rain that day had been known to survive.

The smog started before dawn. When she got up, Sayaka couldn’t see more than three feet outside. She tried calling her family, but never got an answer. Over half the people that lived in her building had died in the past few months.

As soon as she saw the smoke, Sayaka had run to her father’s secret panic room and grabbed the gas mask. It was a specially designed room in the center of the apartment.

Her father had prepared it in the event of a catastrophe, stocking it with weapons and enough food for the family for three months.

But since she was here alone, it would last much longer. Sayaka was grateful that she didn’t have to venture out into the world to scavenge for food like she heard most of her neighbor’s doing.

Every once in a while, her neighbor would stop by for a visit. Sayaka would share a little food with her and in exchange get caught up on the latest gossip.

It was the only contact that Sayaka had with the outside world. Phones had stopped working. TV channels no longer broadcast news. Even the internet had gone eerily silent. Strange since she still had electricity.

Sayaka wondered how long that would last though. She figured that it would get shut off eventually. Not that she was too worried because her father had left a generator in the secret room. So, she would be fine for a while.

She wondered how long the world would continue like this though. How long till the rest of the people in her building died from being exposed to the elements like this?

Was this the end of the world like the stories her mother had told her as a child? Had Amaterasu Omikami hidden herself in the cave once again causing this darkness to fall upon the earth?

She closed her book and tossed it off to the side. There was no use in pretending that she wanted to read. She wanted to go outside. She wanted to run in the streets. And she wondered if she would ever get that chance again.

One thing she knew for sure though. Nothing would ever be the same again.

Thank you for reading! I hope you enjoyed this story. Ask your questions in the comments below. Give me your feedback as well and let me know which stories you enjoy the most.