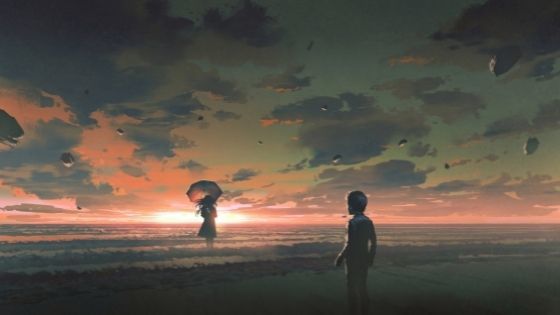 Katsuro shuffled his way down the beach slowly. Watching a boat floating off to his left. Not really paying attention to where he was going. He watched the sun setting off in the distance. The sky glowed amber shades of red and orange.

The boy tired of walking and sat down in the sand. Waiting for the flaming orange ball to fade away below the horizon. Feeling frustrated and angry.

The woman would not appear this afternoon. It had been days since he had last seen her. He missed her. Katsuro wasn’t sure quite why. It’s not like they ever talked much. She never spoke at all. Just walked beside him carrying her umbrella. Listening to him blabber on about whatever was bothering him that day. But talking with her always made him feel better.

Well, at least until he had begun noticing that the recent deaths taking place in the village all coincided with her arrival. Katsuro exhaled nervously and looked around to see if anyone had followed him.

He had noticed Misaki following him earlier. The young chief’s main counselor. Misaki was an old crone who was feared by the entire village. She held great power over the villagers. They had put the new chief into power at her command.

Nobody really liked the new chief. Nor did they respect him. It’s not even that they actually respected the old crone either. It was more like abject terror that she would curse them or cause some evil to befall them.

Katsuro scoffed whenever people mentioned it. He didn’t consider himself a superstitious person at all. Which was why he hadn’t really made the connection to his new friend’s arrival and the death of the villagers. A total of nine people had already died.

It was all people could talk about. Everyone had an opinion about what was causing so many people to begin dying out of the blue. Katsuro hadn’t given it much thought. He thought it was just a cycle of life. But now he wasn’t so sure.

Maybe Misaki and the chief suspected him. Was it possible that they knew he was talking with this strange woman on the beach? The first person had died the day after the woman with the umbrella had appeared.

It’s not like she lived around here somewhere. The island was small, and Katsuro knew almost everyone who lived here since he was a young child. There were a few other villages scattered across the island. But Katsuro visited them frequently and had never seen her before.

When he looked up, she was there. Just like always. Standing in the waves between him and the sun. Her face hidden in the shadow of her umbrella. Her hair blowing out around her in the wind.

Katsuro stood to his feet. He glanced around to see if Misaki was watching. He didn’t see anyone else besides the woman in front of him. He took a few steps forward. Hesitantly. Unsure what to say.

The woman with the umbrella stood there. Unmoving. Wating for him.

“Who are you?” he finally asked.

She stood there silent and unmoving. This was different. Normally, she came forward out of the water as soon as he spoke to her. Then she would fall into step beside him as they walked along the beach.

But tonight, she stood silently in her place. Katsuro knew that she wouldn’t answer him.

“I thought that maybe you were the mother I never had,” the orphan said trying to hold back a sob. “But ever since you came, there has been only death and destruction. I never should have trusted you.”

Katsuro walked closer. Trying to see her face. Trying to look into her eyes. Moving around so the sun wasn’t shining in his eyes. It was something he had never tried to do before. He had always kept his head down when talking to her. But he had to know who this woman was.
When he saw her face, Katsuro stopped dead in his tracks. He caught his breath.

She had transformed herself well, but he still recognized her. She smiled coyly. “I was beginning to think you would never catch on.”

“What’s going on?” he growled angrily. “Is this a trick?”

“I want you to be the village chief, but I needed to make sure you were worthy.”

“What about Takara? He is our chief.”

The woman cackled, “Takara is a foolish, yes man. He has no spine. But I know you are different. He will die like the rest.”

“No!” Katsuro shouted. “I will tell everyone what you are doing.”

“That’s too bad. You’ll be the next to die then, and I’ll have to find someone else to take your place.”

With a puff of smoke, Misaki was gone. Katsuro looked around dumbly. He didn’t believe anything like that was possible. He had to find a way to warn Takara, and then get off this island before Misaki could put her plan into effect.

Now, he just needed to find a boat to escape in. The boat he had seen earlier was perfect and would fit the bill exactly. Katsuro took off running down the beach to see where it had landed before it got any darker.