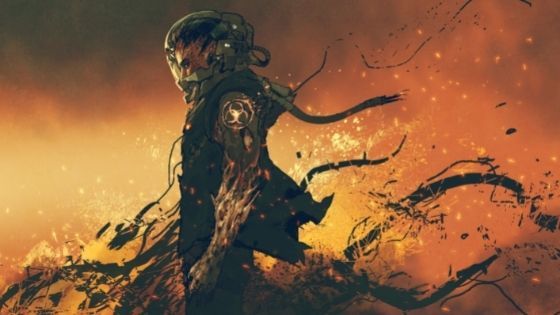 The short, petite woman blinked and shook her head. Her breathing quickened. She felt her heart palpitate. Jeannine brushed her reddish-brown hair back from her face.

The huge man took a step closer in her direction. She could feel a wave of heat emanating from him. She stepped back and squinted for a better look because she couldn’t put her glasses on under the helmet. Jeannine was pretty sure that this was Hercule though. It looked like him, at least.

“What happened to you?” she asked.

The man took another step closer. Close enough for her to see the whites of his eyes. But there was something wrong with him. His entire eyeball was white. He had no pupil. No iris.

“Hercule?” she whispered. Her voice quivering. “What did they do to you? Where have you been these past six months?”

The man cocked his head to the side and looked at her for a long moment through hollow eyes. There was no glimpse of recognition in his face.

“It’s me, Hercule. Don’t you remember us? I came here to find out what happened to you. I thought you had,” she paused. Her voice lowering to a whisper before completing her phrase. “I thought you had died.”

Jeannine reached out her right hand and touched his arm gently. The tattered sleeve of his uniform flaked and drifted to the ground like ashes crumbling from paper.

She gasped and pulled back in horror. The flesh on his arms lay shredded on open layers. A glowing orange and yellow tattoo with three half-circles surrounded by a larger red one etched into his flesh.

Jeannine gasped and stepped back in horror. Her hand covering her mouth. Her eyes flickering back and forth from the tattooed symbol on his arm to his white eyes. And then back again to the strange formation of curves and circles.

“What does that mean, Hercule?” she asked when he glanced down toward his shoulder.

The man shrugged. He looked back up at her. It gave her a strange feeling to be looking into his eyes. It was like she knew him, and at the same time like she was looking into the eyes of a total stranger.

And she didn’t even know if he could see her really. The weird blank look on his face. The completely white eyeballs. Like the eyes of a blind man, she had seen once in India.

Yet, she knew Hercule, or whoever this was, could see her. Or at least sense her. She raised her arm out to the side to test him. His white eyeballs looked out toward her outstretched hand and then back again.

She caught what seemed to be a flicker of recognition in his pale, white eyes. He cocked his head to the side. Just like he always did while pondering a new idea or which course of action to take.

“Hercule is no longer here,” he said bluntly. “You are mistaken. You should leave.”

“No, that’s not true. I don’t believe it. I know you, Hercule. I would recognize you anywhere.”

Jeannine reached out a hand to touch him, but he twisted away from her and held out his hands.

“Do not touch me. It would not be good for you. You should leave. Now!”

She took a step closer, but he reached out a hand to block her.

“Stop. Don’t come any closer. You are too close already. You will be contaminated. Then it will be too late.”

“Contaminated with what, Hercule?”

“Do not call me that. Hercule is no more. I am only a weapon that was created to unleash destruction. But I do not wish you harm. You were special to the one you call Hercule. I can sense your bond.”

“Who are you? And what have you done to my Hercule?”

“I have done nothing to him. I am only a copy of the one you call Hercule. Others created me to be a weapon. It is not my will, yet I have no choice.”

“What happened to Hercule?” Jeannine asked.

She felt her voice quaver at the end even though she tried not to let it show. The man had once loved simply shrugged.

“I remember him vaguely. Remember being him. Retain some of his memories. But they faded long ago. Memories they tried to scrub from my mind. But I still feel them. I feel you in my bones. But that is all it is. Only a memory. You were special. You must leave before it is too late. I can no longer protect you.”

“Protect me from what, Hercule?” she pleaded.

“From fire and from death. The destruction that is to come. This is the apocalypse. And I am only one of many. I am only the beginning.”

The man Jeannine had once known as Hercule turned and walked away. She looked down and noticed that her hands looked strange. There was something off about them. She turned her palms face up.

The skin around her arms and hands seemed loose. Like it was coming off of her flesh. Her arms beginning to tear and shred like Hercule’s arms had been.

Jeannine looked over at him. He didn’t look back at her. She couldn’t see his mouth or jawline through the helmet, but the eyes and forehead were the same as the man she had once loved.

She had no idea what had happened to him, but it was enough that she was here with him in the end. The last six months without him had been miserable.

Jeannine took a step forward and smiled at him. He still didn’t look over at her. The sound of an intercom crackled.

Jeannine saw flames building up around them. Explosions and fireballs erupting violently. This wasn’t at all what she had expected. How had she ended up here? Was she a clone too?

She shook the thoughts away and stepped forward. Closer to Hercule. She reached out and took his hand. Slipped her fingers between his. He didn’t pull away.

Hercule turned to look at her. She saw the reflection of her face growing brighter with rising flames. Her eyes stared back at her from the reflection. Pure white. Just like Hercule. She smiled at him and squeezed his hand once more before they were both completely engulfed by the flames.