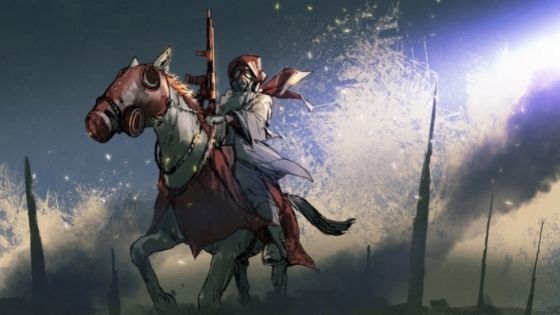 Mamuka surveyed what was left of the city around him. He scanned the area from side to side. Looking for any sign of movement, but saw nothing. He listened for any sounds but heard nothing. Only the continuous whistle and low moans of the wind blowing around him.

He clicked his tongue and flicked the horse’s reigns. The large, grey mare lurched forward with a quick start. But Mamuka knew that her pace wouldn’t last long. The beast would quickly slow down, and he would have to flick the reigns again and kick her in the sides to keep her going.

The horse wound through a yard and followed a broken fence up between two burnt-out houses. Smoke still wafted from the larger home to their left. Mamuka continued to scan the area. Watching for any sign of movement. But there was nothing.

They rounded the house and came out behind two other houses. Strangely enough, one of the houses farther on had not caught fire. Mamuka pulled back on the reins and brought the horse to a stop.

Seeing an unburned house like this in the city was a first. Every other home that they had passed since coming into the town had either already burnt to the ground or was still burning.

The man wanted to take off his gas mask to take a closer look but resisted the urge. He knew the stench would be unbearable. Mamuka had waited as long as he could before putting it on, but they had been almost five miles away when he could no longer take it.

None of his colleagues had been able to make it as close as he had, even with their gas masks on. He knew they were weak, but he didn’t despise them. Let them wait another day for the wretched fires and smoke to die down before they came in with their equipment.

Mamuka refused to wait. He knew time was of essence. They needed to get in as soon as possible if they wanted to find clues that would lead to the source of the burning cities. This had been the fifth in the past month.

Fires like this had started sporadically just over a year ago. Initially, they only took out a few houses. But as time went on, they began to burn stronger and longer. Now, the flames were taking out entire cities with populations of 50,000 people at a time.

The strangest part of it all was that none of the inhabitants were ever found. Not so much as a single corpse had ever been found. It was almost as if the entire population had been abducted before the town got leveled by fire.

He swung the barrel of the gun down in the direction of the house and dug his heels into the horse’s side for it to move forward. But the creature refused to budge. Mamuka flicked the reins harder, urging the beast with another click of the tongue.

Mamuka sighed in exasperation and swung his leg over the saddle to get to the ground. This had happened once before. Two cities back. Mamuka had tried everything he knew to get the horse to move forward to now avail.

The brute beast was as stubborn as a mule. He knew it would do no good to insist now though. He wondered what it was that the horse was so terrified of.

The man felt no fear himself. Only a strange sense of curiosity. He really wanted to know what it was that caused entire cities to burn down and huge populations to go missing.

The news reporters had been calling them Apocalypse Fires ever since the beginning because of the horrible smell of sulfur. Sharp, coking, and this particular variation left a bitter taste in the back of one’s throat.

Mamuka looped the reins around a bush so the mare wouldn’t wander off until he got back. Then he strode around the house, looking for any sign of life. The house was closed up tight as a drum.

After circling it warily a few times, he finally made his way up to the front door. Mamuka tested the knob and was surprised that it opened easily. The man had almost gone straight for kicking the door in since he had expected it to be locked.

He pushed his way inside, pointing the gun in front of him. Mamuka went through each of the rooms one by one but found nothing. Strange that this house hadn’t burned along with the others.

It reminded him of the first burning cities he had visited. There had often been unburned houses. But each time, larger and larger percentages of the towns had burned. After a while, the cities all burned completely.

This was the first time in months that he had found an unburned house. Mamuka felt excited. Maybe they would find something in the house that could give them a clue as to what was causing these cities to catch fire.

He went back outside to get the equipment in his saddlebags. But to his surprise, the horse was no longer there. Strange, since Mamuka had taken the time to tie it up.

The man walked around the house looking for it. But it was gone. Mamuka kicked at a rock furiously. Stupid horse. He never should have brought it in the first place. The only reason he had brought her was because his regular ride had gotten ill. Mamuka had to leave it behind and ride this lazy animal he was now on.

He looked for tracks to see if he could tell what direction it had gone in, but the only horse tracks he saw were those he had made riding in. And there weren’t any fresh tracks leading back out that same way.

Suddenly, he became aware of something different. They weren’t horse tracks, but something else had been walking around out here since the time he had left his horse.

Mamuka’s eyes followed the direction that it had moved in or come from. He wasn’t sure yet, which it was. His eyes sensed a movement in the shadows of the bushes beside the burning house that they had come past earlier.

He looked closer and saw the outline of a crouching figure. Mamuka began running toward it as silently as he could. It moved away from the bushes and around the side of the house.

When Mamuka came around the side of the house, he saw the creature loping across the far end of the yard. Since the homes had burned down here, It didn’t have anywhere yet to hide. The man broke into a dead run and began gaining on it.

It ran funny. He noticed that it moved like an ape bent over on all fours, but at the same time, hopped a bit like a frog before disappearing behind a small bush.

He came panting around from behind the shrubs only to see nothing there. As if the ground had opened up its mouth and swallowed the thing up.

Mamuka walked slowly now, looking for its tracks. He trailed along, looking for signs of broken leaves or bent grass. The led him onward a few feet and disappeared into a hole that seemed too small for the animal to have vanished into.

Two beady eyes glared up at him. Mamuka took a step backward and swung his gun up and around to his side.

The creature leaped up and out at him. The gun went off in his hands. It was pure instinct. His fingers pulling the trigger smoothly and fluid motion.

The creature fell to the ground at his feet. Gasping for air. Looking up at him in surprise and shock. It reached out a finger to his boot and poked at them gently before breathing its last. Its eyes closed, and its head lolled to the side.

“Doggone it, you foul creature. What did you do with my horse?”

But it was too late. This thing, whatever it was, would no longer tell anyone its secrets.