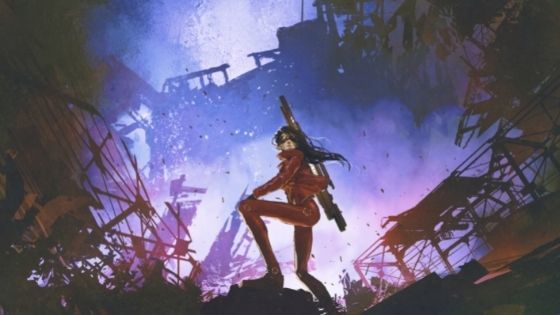 In The End, We All Die

In the end, we all die, Simona” the shrill voice, still laughing hysterically, echoed off the sides of the rubble and ruins that surrounded her. “Even you. You won’t live forever, you know. You may as well give up now. There is no hope left for the world.”

Simona scanned the buildings that surrounded her, trying to locate where the voice was coming from. But she couldn’t place it. She wanted to scream in frustration. This was the third city he had destroyed this week. There hadn’t been enough time to save the other two. She had arrived too late.

This time it was different though. Even though the city had already been destroyed, this was the first time that the Destroyer was still here. Well, that was what everyone else called him. But she knew him as Blazej. Somehow, deep down, she had known it was him all along.

She mentally patted herself on the back for such highly honed intuition.

“That’s where you are wrong, Blazej. I am going to live forever. The only one dying today is you.”

Simona clapped her hand over her mouth. She had never spoken like that to anyone. She never had too. At least not as far back as she could remember, which wasn’t very far. She lost all her memories in the accident.

And Blazej had been the one to put her back together. Minus a few parts. Adding a few parts. She was different but alive. And for that, she had been grateful.

He had made her much more powerful. Stronger. Faster. Better. In so many ways. And for the last few months, she had never resorted to using her gun. She had always been able to handle violent situations without depending on her weapon. Simona had consistently found creative ways to resolve escalating situations before they got out of hand.

Simona had only brought it in case of any extreme situation where she had to take a long-distance shot where she couldn’t resolve things directly. But this was different.

At first, she tried to rationalize it by telling herself that she was doing it to save other cities. But Simona knew that wasn’t true. She was just angry at having been used by Blazej. She felt guilty as if she were responsible for helping him get this far.

Because she had been his bodyguard for the past few months. Protecting him from danger. Preventing attempts on his life. And only now she found out that he had been using her to cover up all of his shenanigans.

Now, it had all started to make sense. She hadn’t understood at the time why the attacks on Blazej and his company had increased so intensely. But now she felt like kicking herself for not having caught on sooner.

Her fury condensed in the pit of her stomach and Simona became laser-focused on finding him. She had had enough of this nonsense. It was time to put an end to his charades and expose him for what he had done to these cities.

She had stopped running. The sound of smaller explosions still going off in the burning buildings no longer frightened her. She had only one mission now. And that was to find the man responsible for all of this destruction.

Simona put her head down and headed in the direction she thought Blazej’s voice had come from. There was only one building still standing that was near enough for her to have heard his voice. There could only be one reason that it hadn’t been destroyed. And that was because the culprit was still in there.

Her early arrival had most likely put a stop to his escape. She felt pleased with herself for having figured out what city he would target next. He most likely hadn’t expected that at all.

The gun was now finally in her hands for the first time after all these months. But she didn’t need to use it to break into the building. The long-legged, bionic woman kicked the doors in like they had been made of cardboard. She moved swiftly, from one room to another, until she came to a large, open conference room.

She saw Blazej through a glass pane, sitting at the far end of the table. Simona didn’t bother knocking or even trying to open the doors normally. She tore them off the hinges with a single, solid kick.

Simona screamed and tried to pull the trigger. All her anger and rage at the destruction he had caused came to a boiling point. But moral pacifist that she was, Simona wasn’t able to bring herself to shoot him.

She spun his chair away from the computer so he was facing her. He smiled wanly and whispered softly, “I knew you wouldn’t shoot me. They set me up and said you would. He wanted to frame me.”

But it was too late. Blazej had already taken his final breath. She looked over at the computer. It was still set to play random clips of Blazej saying random phrases meant to irk her. Then Simona looked down and saw a bomb under the desk. Triggered by when she had turned the chair around. Counting down. Two minutes left.

Just enough time for her to have shot Blazej and reported him to the authorities before the building went down. Now she had to find out who set them up. But first, she had to get out. She stretched her long legs as fast as they would go to get her out of this building before it went up in flames.

Simona didn’t bother trying to go back out through the doors. The main entrance was too far down. She pulled the trigger on her gun for the first time in months. The thick glass windows shattered from the impact. Weakening them enough for her to break through with little effort.

The woman covered her face when she leaped through the shattered glass. The drop to the ground below wasn’t easy on her, but the titanium that supported her body withstood the impact. And then Simona was back up on her feet and running down the street before the building went up in flames.

Simona knew what her mission was now. Forget the burning cities. Nothing was going to stop her until she found the person behind this fiasco, and make him pay for what had been done to Blazej.

The fury she had felt earlier was nothing compared to the burning rage inside her now. Hot tears of anger and sadness evaporated into the wind as she raced back to the waiting chopper.

Halfway there, Simona paused and turned to bid farewell to her friend before the building went up in flames.

“Yes, my friend. We all die in the end. Even I. But I will never go down without a fight. I will find out who did this to you. I promise you that. I will never give up.”