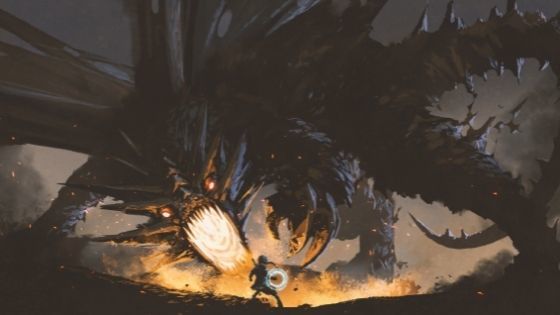 The humongous, dark figure loomed hideously in the shadows. Mei froze. It was too late. Her hopes of getting in and out of the cave before being spotted were now dashed. She hunkered down in the shadows, hoping she wouldn’t be seen.

But the giant figure took another step in her direction. Mei fought her instinct of turning to run. There was no way she could outrun the small dragons that she was used to seeing fly around the mountains of her home country. Much less a giant one of this size.

She slipped her hand into the soft, leather pouch at her side. The dragon stopped moving and snorted loudly. Its head moving steadily in her direction.

Mei stopped tugging at the object in her pouch. She held her breath.

She watched the soft gleam in the dragon’s eye grow brighter. Then flare to life. A bright, orange glow emanating from deep within its fiery body.

The black dragon opened its humongous mouth and hissed loudly.

“I smell you human. Come out and answer my questions before I torch you alive. What brings you to my cave?”

Mei stood back up to her full height which barely came to the height of the dragon’s claws. It opened its mouth and hissed even more loudly, sending a trail of glowing smoke along the damp, cave floor.

The fiery glow from the dragon’s belly lit up even more of the dark cave. Mei could see greater detail of its body in the orange light. Its giant claws were enormous. It’s large, hard scales were impenetrable, making it almost impossible to kill.

Mei had never heard a single story of anyone ever killing a dragon before. The fact that she would even attempt to do such a thing, seemed to be the epitome of foolishness. She had hoped to find what she needed and leave before being discovered.

The old blacksmith had told her that he found most of his iron here over the past fifty years. And he had claimed that he had never seen a dragon around this particular mountain. She had honestly thought that she could come and go without facing one of these monsters.

But now it was too late. She was here, and the dragon had spotted her. But she wouldn’t go down without a fight. If only it weren’t so big though. Why couldn’t she have been found by a smaller one?

Mei wrapped her hand around the large, solid rock inside her pouch and slid it out behind her right thigh. Away from the dragon’s line of sight.

She didn’t know if the dragon knew what this object could do, but she didn’t want to risk taking the chance that it might recognize what she had.

“What are you doing here?” Mei asked the dragon quietly. “I didn’t mean to disturb you, but I was told that no dragons had been seen in the area for over 50 years.”

“Silly human,” the dragon hissed. “Dragons are never seen unless we choose to be seen. And I have never chosen to be seen by a human until you caught me unaware. And only because I’ve been busy making preparations for the arrival of my young.”

“I apologize honorable Dragon. I will leave and never return.” Mei said and took a step back.

“It’s too late, human. I can’t let you leave now. Besides, you came at just the right time. My young are about to hatch. They’ll be ravenous. You saved me from having to go out and find them something to munch on.”

Fear hit Mei like a lightning bolt. Her heart dropped to her stomach. She instinctively activated the weapon in her hand.

Mei let the Rudruntyne rock drop to the end of the Oskil chain it was attached to. She snapped it up into a quick spin behind her. And before she could pull it around in front of her, the dragon blew out a stream of blazing fire from its mouth.

She felt the heat, but it didn’t hurt. Even from behind her body, the Rudruntyne weapon absorbed the flames before they could harm her. The ground still hissed and burned where orange drool had dripped from the dragon’s fiery mouth.

The giant beast hissed in fear and fury. It tried to get off another stream of fire but came up empty. It stood there with its mouth wide open as if it were about to devour her whole. She felt the wind coming from its breath. But there were no more flames.

Mei didn’t hesitate to finish off the job. She flung the Rudruntyne into its mouth and deep down its throat. The dragon choked and tried to spit it out. It took several tries before the Rudruntyne hit the ground, covered in dragon drool.

But it was too late. The weapon had done its job and absorbed the fire from the dragon’s body. The giant beast lunged away from Mei. Trying to head deeper into the cave. Then it writhed and squirmed. And eventually lay twitching before breathing its last.

Mei gulped and rubbed her eyes. She could barely believe what had just happened. The girl had barely believed the blacksmith when he told her it could protect her from a dragon. But she had no idea just how powerful it was.

She snatched the Rudruntyne up and wiped it down before placing it back in the pouch. She started to leave, but curiosity got the best of her. She wanted to see what dragon eggs looked like.

They weren’t that impressive. They looked like skinny, leathery ostrich eggs. She put the four eggs in her pouch as well. She kicked at the dragon’s corpse as she walked back past it. She wondered what others would have to say about her when they found out she had killed a dragon.

Would they call her a heroine or consider her an enemy for breaking a taboo.