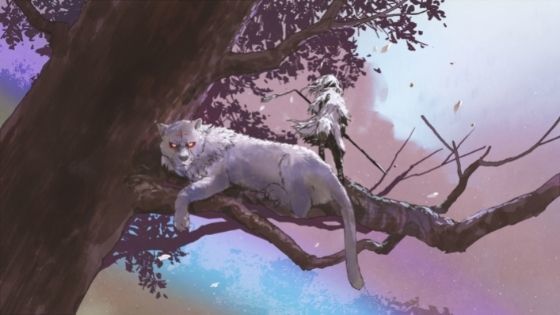 “What!?” Kaltrina exclaimed. “What are you talking about. That’s not true. I don’t believe it.”

The tall, willowy girl with silvery-white hair glared at the Brothebit lying lazily on the branch in front of her.

The large, cat-like creature glared back.

“Are you calling me a liar, child?”

Its eyes flared bright yellow with irritation, and the Brothebit pulled back its lips in a snarl, revealing its large, sharp fangs.

“I am a Brothebit. Just like you. I just haven’t fully developed my tail and fangs and fur yet.”

The giant, white feline sighed with exasperation. Realizing that arguing with this girl was futile, she turned away from her.

The Brothebit lay on the large branch quietly, but her tail continued to twitch in irritation. She could sense the girl’s eyes boring into the back of her head.

The child was stubborn, ferocious, and explosive. All qualities that the Brothebit admired. She had instilled them in this young girl since the day Shinx had found her.

“I hoped that one day it would be so, child. And I raised you as such. But it is not to be.”

“What are you talking about? What am I? Who am I?”

The Brothebit sighed. Rolled over. Glared at the Katrina.

“You are human. Mostly human anyway.”

“What? No!” the girl screeched furiously. “I am not human. We hate humans. We hunt humans. We kill humans.”

“And yet, that is what you are, child. Mostly human. There is no denying it. You will never be full Brothebit like me. It is time that we part ways. You must go your human way. I must go my Brothebit way. I must return to my kind. I cannot take you with me.”

“Why are you doing this to me,” the girl screamed angrily, trying to hold back the tears. “I thought you loved me. I thought you were my mother.”

“All children eventually leave their mother and father and head out on their own. It is time for you to do the same. Be on your way. Find your own kind. Live your life with them.”

“Please, don’t do this to me,” Katrina pleaded. “Let me go with you. I will be good. I will do whatever you say.”

“It’s not about you being good or not. If you return with me to my kind, they will slaughter you. The Brothebit hate you and your kind.”

Katrina slammed her lance furiously against the branch she was standing on. She wanted to ram it through the Brothebit’s ribs, deep into her heart. Again and again.

The girl held back the hot tears that threatened to well up in her eyes at the feelings of betrayal and hurt that throbbed with every heartbeat.

She took a long, slow, deep breath that shuddered her whole body at the end.

“Why did you lie to me?” she finally managed to ask quietly. “Why lead me on all this time, if you knew I couldn’t go back with you?”

“I wanted a cub, but never bore young. There was a human. He earned our trust. A good human. He offered to help. Our king told me not to listen to him. But my desire for my own grew and intensified. I went to him and accepted his help.”

Katrina had never heard this story before. She sat down on the large, rough branch beside Shinx to listen to the feline’s tale.

“The man said he was a research scientist who studied the things that make us Brothebit who we are. He called them genes. He said he could make medicine to help me bear young. But in the end, he betrayed me. Or I think he did.”

“What do you mean?” Katrina asked.

“He disappeared. Other scientists took his place. Put me in a cage. Did many hurtful things. The poked and prodded me. In the end, they created you in something they called a test tube. They said that you were a mix of races.”

The Brothebit paused to look off into the distance. Katrina watched the feline closely. Observed her fighting her emotions. She waited for the Shinx to continue.

“At first, I hated you. I hated what the scientist researchers had done. They acted as if you were my child. Even though you looked like them. I was horrified. I felt sickened. Disgusted.”

Katrina waited until Shinx got her emotions under control once again.

“Then, they began to do terrible things to you as they had done to me. They poked and prodded you. I realized that it wasn’t your fault for being there. If anyone’s fault, it was mine. I felt pity for you. Maybe even something akin to motherly love. And I had to save you. Get you away from them.”

“It was easy. I went with them willingly, thinking they were going to help me. They underestimated my Brothebit strength. They had created the place to contain a human. It was easy to tear through their defenses.”

“So, why did you bring me and raise me?”

“Call it motherly instinct. You were the closest thing to a cub that I had ever had. I cared for you and raised you as my own. I hoped that over time, you would become more like me. Grow fur. Grow a tail. Grow fangs. But instead, you only became more human.” the Brothebit snarled.

“So, I’m human, and you hate me. That is why you want to abandon me.” Katrina stated bitterly.

“No, child. I don’t hate you. I care for you deeply. I swore I would raise you as my own. You make me proud. But it is the way of nature. It is time for you to return to your kind. As it is for me to return to mine.”

“But what will I do without you?” Katrina wailed.

“You will return and learn the ways of humans. You will live with your kind. They will accept you. They will love you. Only don’t tell them where you came from. Make a new story for yourself. Humans are gullible. They will believe you. You will fit right in. I have taught you well.”

“No, I won’t go. I refuse to go. I will stay here.” Katrina shouted vehemently.

“Fine, child. You may do as you like. But you will be alone here once I leave. I will remain with you three days. Then I will go. It will be better for you to return to your kind, so you are not alone. I will show you where they come from. I will show you the place you came from.”

Katrina begged and pleaded with Shinx, but it was no use. The Brothebit refused to negotiate on the terms of her leaving.

The girl stood up and looked off into the distance. A slew of emotions flooded her body. Anger at the lies and betrayal. Rage at her soon abandonment. Fear of her unknown future. And even a twinge of nervous excitement at discovering her roots.

Katrina had always known that she wasn’t like Shinx, but she didn’t know why. At least until now. Everything made sense now.

It had seemed weird to compare how much more she looked like the humans Shinx killed then the Brothebit herself. And now she knew why.

The girl looked back at Shinx, still lying on the branch. Sulking over her decision. Katrina knew it had to be hard for her. And yet, she understood that the Brothebit was only trying to do the right thing by her. And she appreciated that.

Katrina was grateful for the years of care and sacrifice the creature had made for her. She decided to spend time and enjoy these last three days with the only mother she had ever known. And, if possible, Katrina would return again to see her once more. And maybe even make things right once she understood what happened herself.