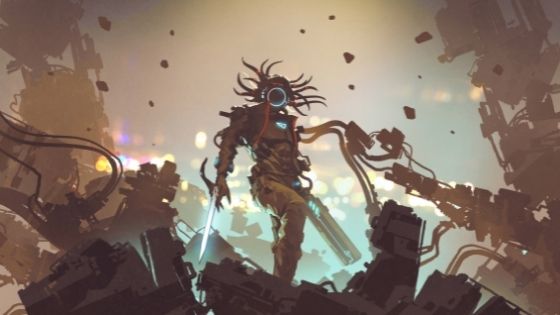 This place is a mess. I’ve been stuck here for three days. My crew is dead. I think. I know the two that I found are. The other three. They’re still missing. I have no idea where they might be or how to even find them in this place.

This junkyard. Or whatever this is. It’s disgusting really. We did a simple flyover. It was supposed to be a routine mission. Just make the rounds. Scan the area for anything strange. Take pictures if we did, which we didn’t expect to, and then fly home.

Then, out of the blue, a streak of, well, blue light hit us like a lightning bolt. Are ship lost power instantly and started to fall out of the sky. Everyone bailed. I barely made it out in time. I had just enough time for my parachute to open and cushion my fall.

That’s probably what saved my life. Jumping out at the last second because I wasn’t in the air long enough to get shot at before I hit the ground.

My mate, Jagannath the Indian, had several holes shot through his body. And Lungile the Zulu looked whole, but they sliced his parachute in half. The edges were singed. So, I assume whatever blue bolt knocked us out of the sky took them out as well.

It’s too bad. I really liked them both. Lungile was hilarious. He always made us laugh. He was a hoot and a half. Jagannath was a lot more serious, but he was super smart. Jagannath was the one who usually got us out of the jams we happened to get ourselves into.

Now, I’m on my own. Well, technically I still have three other potential crew members out there. If they survived. Although, after seeing Jagannath and Lungile, I’m not holding my breath.

If you listened to my previous recordings, which probably means I’m dead, then you know that I holed up under a pile of junk for the first full day. Someone or something was out there prowling around. I could hear them crashing around, probably looking for us.

The next day, I spent looking for our ship. It wasn’t hard to find. Totally destroyed from the crash. And the little that survived was torn to shreds. Whoever shot us down wasn’t playing around.

I went ahead and slept inside the cockpit the second night since it was more comfortable than sleeping in the cold dirt with a sheet of metal over my head like I did the first night.

Today I spent most of my time looking for Captain Ion the Greek, Mihail the Romanian, and Livia the Italian chic. Just thinking here, in case you find these recordings without my suit or body to identify me, I’m Lieutenant Theudhar Osborne.

Sheesh! I hope you don’t find these recordings without me being there. That would really stink.

Anyway, I think I have my bearings now. I’ve given up hope of finding anyone else around here. I’ve circled the area several times. Widening my search range each time. So, tomorrow, I’m headed back to base. I estimate that it will take me three weeks to get to the nearest portal.

But I ain’t counting my chickens before they hatch. Let’s just take this one day at a time. I do have enough food and supplies for three days. And I need to find more water. I think I saw a river over toward the east when we were flying in. So, I may need to take a detour, which means it will take me more than three weeks to get back to the…

Holy cow! I thought I heard something back there. So I snuck back to hide in the cockpit. Right now, I’m crouched down in the corner. I don’t have a very good view of the surrounding area. But I can see in the direction I heard the noise coming from. It sounded like a person walking through the piles of junk. They weren’t even trying to be quiet. Hopefully, it’s not the same group that shot us down.

[Silence. Hissing in the background. A gasp. Shuffling noise. Then another long silence again.]

Whoa! Wow. Holy cow. Oh, my goodness. You won’t believe what I just saw. It looked like some crazy cyborg from the future. No face. Just a thin blue circle with short tentacles waving from its head. Clothed in a khaki-colored uniform from head to toe. Another one of those glowing blue designs on its chest and arms. Made it looked like it was powered like IronMan, only without the metal suit. But it did have a long blade sticking out of its right hand. And it had what looked like a cannon blaster in the other.

It stood there on top of the pile of junk out there for a minute as it swiveled its head around. Almost as if it were scanning the area for something. I think it noticed me. It paused when looking in my direction. I almost took off running and screaming for help. Not that it would have done any good. Then it just took off. It’s like it jumped into the air like a, I don’t know, a grasshopper.

It shot up over the roof of the cockpit so I didn’t see if it landed or flew away. But I held my breath and waited. And waited. And waited. It’s been like fifteen minutes and I still haven’t heard anything. I think it’s gone. I hope it is. I don’t know what I’ll do if…