That Must Be Momma! – Dave Bailey
0 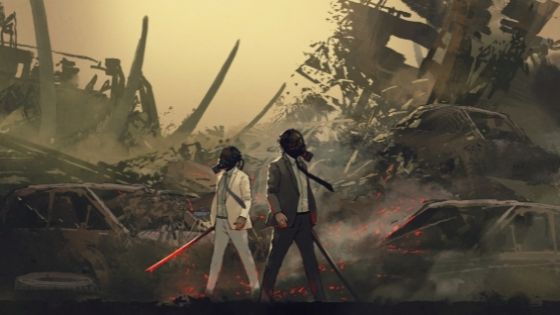 “Did you see which way it went?” Kevin asked as he jogged up to Rolf.

The larger man in the dark suit glanced down at Kevin’s sword. Blood ran down the blade and dripped onto the ground. Rolf shook his head.

Kevin followed Rolf’s gaze down to the sword. He twisted it to the side for a better look. Then glanced at his white jacket. He frowned and brushed at it absentmindedly. His gaze followed the trail of blood streaks, smears, and splatters that surrounded them.

“Well, at least we know these things bleed. If they bleed, we can kill them. Right?” Kevin asked, looking back at Rolf.

Rolf grunted in reply. He squatted for a closer look at the trail, trying to make sense of it. The trail of blood ended abruptly.

“Maybe it ran out of blood and melted into the ground,” Kevin suggested. “Or perhaps it opened a portal and went back home.”

Kevin circled his brother. Waiting for him to say something. He was a man of few words, but still. Rolf’s lack of response was getting on his nerves.

“Dude, c’mon. You gotta say something. What are you thinking?” Kevin persisted.

Rolf stood slowly to his feet. The tip of his long blade brushed against a rock, making a soft scraping sound. He winced and jerked the tip away from the ground.

Kevin saw his brother’s instinctive reflex. He couldn’t see Rolf’s facial expressions through the dark visor of his helmet.

The quick, knee-jerk reaction to the sound made him think Rolf was still in shock after the attack.

“Hey, look. It’s okay. It’s normal to react to stress in your own way. I remember what it was like when I first joined the military. Our first few missions had my nerves on edge for days. It’s normal to be spooked out after something like this. You handled yourself well for a politician.”

Rolf raised his finger to his lips to silence him.

“What?” Kevin hissed in an exasperated voice. “I’m talking to the earpiece in your helmet. No one else can hear us.”

Rolf ignored him and kept scanning the surrounding area.

Just then, they felt the sound of rumbling under their feet. A pile of junk scraped and rattled around until they were tossed aside. A row of four giant horns burst out from the ground, pushing up through the scraps of metal.

Kevin looked at Rolf and shouted, “That thing we were chasing was only a baby!”

Rolf nodded and shouted back, “Run! That must be momma.”