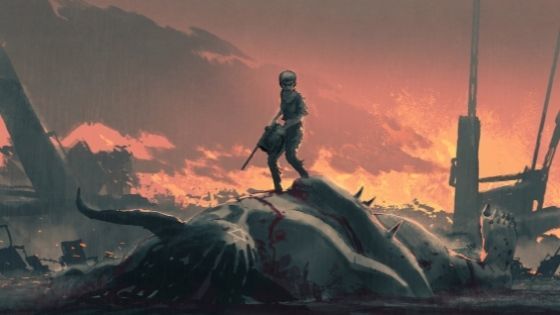 Natalie faced the giant standing before her. A twinge of nervousness. She hadn’t expected Mael’s giant to be quite so big. Doash was almost four times taller than herself. It didn’t even have to do anything. It could just step on her like a cockroach or spider and crush her to smithereens. She turned on the chainsaw.

The giant growled in resonance with the sound of the churning motor. It followed suit almost as if keeping in tune with the sound it was hearing. She wondered what it would feel like to be run through with its giant horns

“Great, a musical monster!” she sighed.

The giant lumbered forward taking a step in her direction, close enough that she could see the large triangular tattoos burned into its massive, green forehead. At least it didn’t seem to move very quickly. It hesitated from coming forward but shuffled its feet slowly as if trying to decide what to do with her.

“Mael is dead,” she yelled up at it. “I killed him myself. I don’t want to hurt you. Just go back home where you belong and don’t ever come back to bother us again.”

The giant paused its shuffling and cocked its head to the side as if pondering her words. It looked over at the house it had just finished crushing before devouring the people who had come running out. It looked to the other houses beyond Natalie.

“Well, you can’t eat the people here. You have to go find food somewhere else. Go to a giant’s supermarket and buy giant food.”

“Hungry!” the giant growled again and took a step over her to move on to the other houses.

Natalie raced forward toward his left foot that was still planted on the ground. She drove the spinning blade across the flesh on his shins. The blade went in deep. Flesh, blood, and even a bit of bone flew in all directions.

The giant roared and swatted at her, but she had already moved on past it and circled around to the other side. She drove the chainsaw across the flesh above his ankle. Trying to go deep enough to cut through his Achilles tendon. Or at least where she imagined the Achilles tendon might be. She wasn’t a hundred percent sure. It’s not like she had ever fought a giant before. But Natalie was hoping to cut through the tendons that supported its weight so it couldn’t continue to move around and eat people.

The giant screamed and jumped forward before she cut through the tendon though.

“Pain! Hurt! Stop!” it screamed angrily at her as it leaned down toward her.

Natalie backed away and wiped bits of spittle that had rained down on her while it was screaming at her in rage. It was disgusting. Natalie gagged and turned her to the side for a second.

When she turned back, the giant’s left foot was over her head and coming quickly in Natalie’s direction. She leaped out of the way at the last second. Just far enough that the giant foot stomp just missed her. If she hadn’t turned to look or moved any slower, she would have been flattened like a pancake.

Natalie scrambled to her feet as the giant reached down for her. His right fist came down from the direction she was running in. She ducked and attempted to dodge, but was too slow. Its huge fingers were wrapping around her. Natalie jumped to climb over them and got high enough up that its fingers were only wrapped around her waist. Her arms were still free.

She smacked him with the chainsaw, but it had turned off in her fall and didn’t phase the giant at all. Natalie flipped the switch, but the chainsaw choked. So, she groaned and flipped the choke valve on. The angry woman kicked her legs, trying to get free while she attempted to turn the chainsaw back on.

It turned on after her third try. She pulled back on the throttle as hard as she could and drove the spinning chain down across the giant’s fingers. His index finger came clean off as the chain sliced through it and hit his middle finger.

The giant shrieked and let her go immediately. His opening fingers snapped the chainsaw out of her hands a good distance away. He shook her down to the ground hard. It knocked the breath out of her, but she managed to roll the way she had learned in gymnastics class as a child to minimize the damage.

She lay on the ground with the wind knocked out of her, moaning softly until she could roll back onto her feet. Natalie limped over to her fallen weapon of choice. The chain had come off, and she thought it had broken. But fortunately, she was able to slip the chain back into place while backing away from the giant and keeping an eye on it.

The giant wasn’t paying attention to her at the moment though. He was holding his hand and moaning over his chopped-off finger. As soon as he heard the chainsaw start back up though, the giant turned his full attention on her and roared in her direction. The giant threw its finger at her, and it came limping back in her direction with its usual lumbering gait.

But this time, Natalie knew what to do. She dodged the flying finger and danced around in front of him until he had his right foot firmly planted in front of her. Natalie spun around him and dug the chainsaw just above his ankle once again. Angling the blade of the chainsaw until it met with her previous cut. Then pressed in the blade on through until it sliced clean through the tendon that supported the giant’s full weight.

The giant toppled over onto its back and hit the ground hard. Stunned from hitting the back of its head hard. It gave Natalie enough time to race up onto its chest a jab the spinning chainsaw blade into several major arteries on its neck and then its wrists.

Green giant blood spewed everywhere as the giant writhed and twisted before expiring in the town square. The townspeople came out and cheered for Natalie who stood exhausted to the side. Several people brought her towels to clean up with before leading her to the mayor’s house for a giant victory celebration.