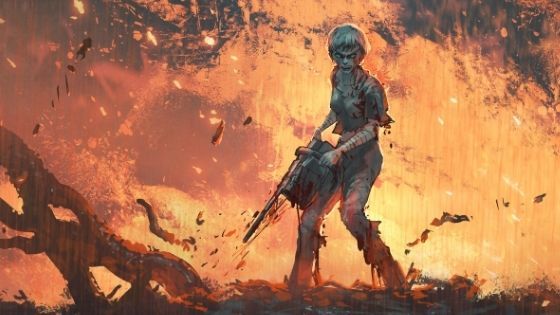 “You better not come any closer!” Marcel shouted. “You don’t know who you’re dealing with. If you come any closer, I’ll kill you. You’ll never get close enough to use that stupid chainsaw.”

Marcel felt rather silly for having yelled that same line again for the fourth or fifth time tonight. But unlike the previous times, he had always had a path of escape through the flames. Only this time he was completely surrounded by the fire. The only way out was past Natalie.

He nervously took a step back and stepped on a small branch that cracked loudly under his weight. The sound startled him and he jumped forward again.

“Listen, Natalie. I know you liked Mirek, but I was ordered to do what I did. It’s not my call to make. I would have been the one to die if I had disobeyed. You know how it is. You can’t blame me for what happened.”

The young woman said nothing. The fire roared loudly around him. The crackling flames and snapping in the underbrush unnerved him. He looked to the sides for a break in the surrounding inferno for a way to escape. Marcel licked his dry lips and took a deep breath. The heat forced him to cough.

The slobby, old man took another step back. Away from the girl who stood silently on the other side of the ring of fire that surrounded them. The heat burned into his back through his thin, red cotton shirt. Forcing him to take a step forward. He untucked his shirt and pulled it away from his back.

His pants were thicker and protected him better against the heat. He pulled them higher up around his large belly to protect more of his back. They slid back down to their usual spot. So, he pulled them up again and held them in place. Leaning forward slightly to keep the heat from blistering through his skin.

The fury boiling up within Marcel gave him a sense of newfound bravery. He took another step forward. Briefly enjoying a sense of relief at stepping away from the fire.

Marcel raised his arm toward Natalie and pointed a chubby finger in her direction. “That is enough there, young lady! I hereby command that you put that chainsaw down and go on home. You’re angry and need to take some time to cool your head. We can discuss this at a later time and I will convince Mael to forgive you for your insolence and insubordination.”

A brief smirk twitched at the corners of her mouth before the hatred and rage flickering in her eyes along with the flames brought the scowl back. Marcel could see the resolve. It was hard to believe that this was the same girl that had joined the group only 3 months ago. Marcel hadn’t expected her to last a week.

Now, she had hunted him down. Trapped him. And was closing on him. After killing everyone who had stood in her way.

Marcel knew there was no escape. He was trapped in this ring of fire that was slowly closing in on him. He felt the heat of the flames inching closer. Crackling loudly in his ears. Smoke burning his eyes.

He fell to his knees to beg for his life. The tears that began to run down his cheeks weren’t from the smoke and flames. It was fear for his life. All that he had fought for was now coming to an end. And he was so close to achieving everything that he ever wanted.

The blubbering man continued to plead for his life as he watched Natalie’s slow, measured steps coming in his direction. The low growl of the throttled chainsaw growing louder as she moved toward him. Scenes from his life flashed before his eyes. Marcel fell back on his elbows as he tried to move away from the edge of the chainsaw.

The grown man screamed like a little girl. He kicked at Natalie’s feet. Moaning as the spinning chain came toward him. He flipped over onto his belly and covered his head with his arms even though he knew it wouldn’t do any good.

He listened but the sound didn’t get any closer or grow any louder. Marcel wondered if he had already been killed, but his mind just hadn’t realized it yet. He held his breath for a second before opening one of his eyes and looking around. The grumpy, old man turned his head till he could see Natalie.

“Get up you big crybaby,” she growled. “Don’t think you’re getting off that easily. You’re gonna take me to Mael.”

Marcel’s heart skipped a beat and he stopped breathing for a split second.

“I’d rather you killed me now,” he sobbed. “You don’t know who you’re dealing with. Besides, you’ll never be able to get to him.”

He saw the glint of fierce resolve flash in her eyes once again. “That’s exactly what you said about me getting to you, and look where we are now. I’ll find that monster and kill him myself with my bare hands if I have to. And you’re going to take me to him.”