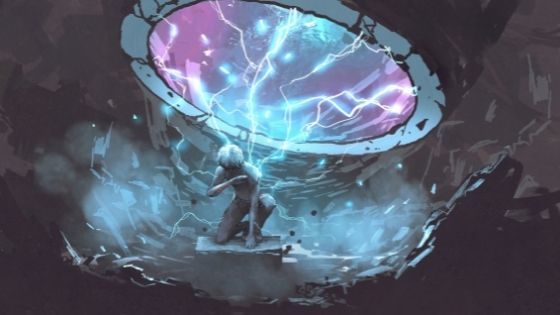 The buzz of static electricity filled the small dark room. A soft glow began to fill in shadows in the darkest corners of the cave. The clicking patter of small creatures who dwelt in the shadowy crevices and hidden cracks as they scurried for the safety of darkness intensified briefly. Then all grew still once again. But it was only the calm before the storm.

A loud crack shot out as a blueish-white bolt of electricity burst from the edge of the round opening overhead and connected with the square stone pillar that rose up from the ground. Six more bolts of electricity snapped out of various sides of the portal and connected with the stone. Then seemed to stiffen and solidify for a few brief instances as the form of a young man began to take shape within the light bluish-white mist that surrounded the stone under the pillar.

Ryuu breathed slowly and deeply as he waited for the transmission to complete. His head buzzed as millions of volts of electricity raced up and down his spine and throughout his body to rearrange his atoms. It was a strange feeling for sure, but it wasn’t his first jump. He knew it would pass just as quickly as it had started.

The ending was the easy part as his body came back together. He didn’t enjoy the start of the jump. Ryuu felt uncomfortable as the bolts of electricity began. Ripping the atoms that formed him apart and transferring them to the other end of the portal. Those were brief scary moments as he wondered if he would end up back in one piece on the other side. But it was almost over now.

Ryuu was careful not to open his eyes until the bolts of lighting stopped. But he wiggled his fingers and toes slightly. Careful to remain in the same position he had when he began the jump. Everything seemed to feel normal. When the last bolt of electricity disconnected from his body,

Ryuu opened his eyes slowly and waited for them to adjust to the darkness.

He focused on the red glow of the nanobots that throbbed softly just under his skin around his wrist. They communicated with other nanobots in his system who were analyzing if everything was ok. Upload successful. Transfer 100% Complete. He breathed a sigh of relief.

Ryuu rose slowly to his feet. He raised his arms out to the side in a long slow stretch. Twisted his head from side to side to work out the kinks. He took a deep breath and pushed out his chest. He enjoyed these trips, but it was always good to come home.

The young man pushed himself up and down on the tips of his toes several times. Then Ryuu raised each knee a couple of times and kicked his legs out to warm up and get his blood circulating again. Ryuu raised his arms up over his head in a classic crane kick move as he spun his body around like a ballerina with his raised right leg pointed out. His body seemed to be functioning perfectly and Ryuu felt great.

He shook his arms and raised them in front of him like a boxer. Then he relaxed and looked around. His surroundings looked familiar, however, things were eerily silent. He peered into the shadowy darkness, but there was no one to greet him.

Ryuu glanced up stars shining brightly through the portal overhead. Something seemed off. Stars were different than they normally look from home. Stargazing had been one of his favorite past times growing up. And every time he jumped to a new portal in a different location, it would always take time to study the constellations overhead.

“Shirou!” He called out. “Hello. Is anyone here?” Ryuu didn’t like this. Not having anyone from his team to meet him. At the very least his handler should have been there to debrief him. Or Naomi the assistant who helped get him through the portals and back. He glanced back up at the stars overhead. This definitely wasn’t home.

Suddenly, he remembered that it was Shigatsu Baka. “Haha! Very funny, everybody.” Ryuu yelled out with a slap to his knee. “Today is the first day of April. You almost fooled me.” Shaking his finger in the direction they usually waited for him, Ryuu jumped off the stone pillar that he had been standing on.

But he didn’t feel the tug of gravity pulling him back down to the ground, and his feet didn’t touch the floor. Ryuu looked down in bewilderment. His body hovered there above the dark stones that lined the ground just inches below him.

Ryuu pointed his toe down toward the floor below him, and his toes brushed against a rock below. He kicked at it lightly. It felt solid enough, but he continued to hover there in the shadowy darkness.

He pulled his body down toward his feet in a half-crouch. Then from there managed to push his legs down toward the floor until his feet were on the ground. He took a few sluggish steps forward. Not that it was hard to walk because he didn’t feel any extra pressure or difficulty in walking. It simply felt like he was using more muscles than necessary to move in the direction he wanted to go.

The entrance to the cave was about ten feet away, so he decided to try to cover the distance in two quick leaps. Ryuu bent his knees and tensed his legs for the jump. With a quick push, he pulled his legs up and prepared to land.

But instead of coming down a few feet away as Ryuu had expected, he continued to float forward through the air about a meter off the ground. He pushed a leg down toward the ground but continued to move ahead.

The wall over the entrance loomed quickly ahead, and Ryuu had to throw his head back and bend over backward at the waist to keep from slamming against the sharp gray rocks that formed the walls around him as he continued to float down the tunnel feet first at a vertical angle.

He slowed to a stop and turned to look back at the distance he had covered. Almost 50 feet. Not a bad jump, he thought. The only issue was that he was just floating there.

Ryuu twisted and moved his body around until his feet touched the floor again. Fine, enough jumping for today. It was better just to walk around here. At least until he figured out how to move around this place.

He looked back down at the thin, red lines around his arm. Ryuu pulled up some numbers. Everything looked like it should. Except for one, small detail.

“Schmack!” Ryuu whispered to himself under his breath.

Everything was as it should, except for a few of the numbers at the very end. Someone on his team must have messed up. Or not. Maybe they had intended this to happen.

Latitude and longitude were correct. The time was correct. But he really didn’t know what those last few numbers meant. And his team had never changed them. Someone had speculated that they might indicate other dimensions around them in the same space and time.

If so, Ryuu had no idea where he was or how to contact his team to find a way back home.