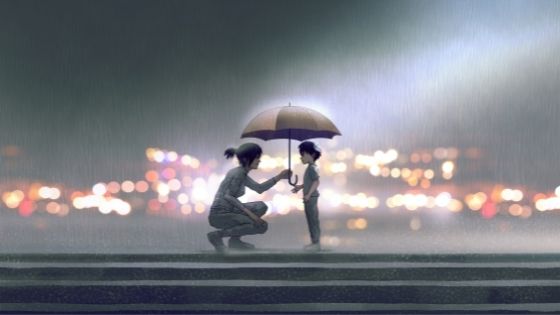 Boy With The Tattered Umbrella

Nadia walked hurriedly through the thick crowds of early evening. Some leaving work for the day. Others out for an evening stroll or looking for a warm, inviting place to grab a bite to eat on a Friday evening.

She smelled the scent of fresh food wafting from inside the restaurants as doors opened to let eager, ravishing customers inside. Her stomach growled, and Nadia wished she could stop herself. But at the moment, she was in a hurry. She still had one more meeting before she could call it a day. Supper was going to have to wait.

Nadia glanced down at her watch. She was cutting it close, but she could still make it if she picked up her pace. She had wanted to leave earlier, but her boss demanded she turn in some bit of paperwork that he deemed urgent before letting her go for the weekend.

She didn’t know why. It’s not like anyone was going to look at until Monday anyway. She sighed and glanced down at her watch again to see how many minutes she had left. Nadia hated being late for an appointment. She hated making excuses. If she walked just a little bit faster, she might yet make it on time.

The auburn-haired woman felt a drop of rain hit her shoulder and looked up at the evening sky overhead. She had seen the weather forecast before leaving and come prepared by bringing a small umbrella just in case.

Nadia had thought about using one of her ridesharing apps to catch a ride, but it wasn’t that far away. And besides, at that time of day, it probably would have taken longer for a driver to pick her up than for her to walk to her destination.

She had forgotten about this particular stretch of deserted road though. Nadia had cut through a back alley and come out in a sketchy part of town. Normally, she would have skirted around it. But due to the short amount of time to get where she needed to go, Nadia had decided to risk it.

The rain had picked up. She quickened her pace. Partly due to the rain. Partly due to her soon tardiness. And partly due to being in the wrong part of town after dark. She scanned the area around here. She saw a man up at the corner.

Nadia didn’t know if she should be relieved at the sight of another person, or afraid at the sight of the stranger on the street. But it was too late to turn around now. She couldn’t pick up her pace. Any faster and she would have been running.

The man squinted his eyes when he looked up at her. Nadia glared at him. Daring him to try her. Her hand already on the pepper spray in her pocket. He simply nodded from the dry spot where he sheltered himself from the rain and lifted a cigarette to his lips.

Nadia continued on as fast as she could. Her heart pounding wildly. Kicking herself and vowing that she would never do this to herself again. Never walk around this area after dark. Never let herself get this far behind on her time. Never let her boss push her into working overtime when she had another appointment.

The angry woman started to cross the intersection when she heard the sound of someone sobbing. She turned her head and saw a young boy at the other end of the street.

She didn’t hesitate. Someone else’s safety was more important than hers. Someone else more defenseless than her needed a hand in this sketchy neighborhood. It made her feel like a protector. She no longer felt defenseless or afraid.

Ten years of training and working in social services kicked in. She ran over and squatted down beside him. Holding the umbrella over the young boy’s head, Nadia asked him what his name was and where he was from.

He seemed to be speaking. But Nadia didn’t understand anything he said. It wasn’t English and definitely didn’t sound like her native French language.

“Come on,” Nadia said, as she took his hand and stood up. “Let’s find your mommy and daddy. We’ll get someone to help you.”

They started to walk down the street. Nadia felt warm and fuzzy inside. Helping children like this was why she loved her job even though she hated the paperwork and bureaucracy.

She heard footsteps behind her and turned to see the man whom she had passed earlier walking toward them. He was leering at them. Nadia couldn’t believe that she hadn’t kept an eye out and noticed him coming sooner.

“That’s my son. I’ve been looking for him,” the man growled.

Nadia knew he was lying. She squeezed the boy’s hand more tightly and looked down at him. It was obvious the boy didn’t recognize him.

“What language does he speak?” she asked, pushing the child behind her.

“English, of course,” the man replied.

The woman took a few steps backward, pulling the boy’s arm back behind her. The man lunged forward and pushed her backward with a mean, hard shove. He grabbed at the child’s arm.

As Nadia fell, she twisted her body to catch herself on the ground and lost sight of the man. Most of her weight landed on her left wrist. She screamed in pain. It seemed like she heard a roar and another scream even louder than hers.

When she turned around, the man was gone. The child stood there, licking his lips. The boy smiled at her and picked up the umbrella. It had broken on one side and part of the covering had torn. But she took the tattered umbrella from the child numbly and held it over their heads.

Nadia looked at the ground for some sign of the man. Wondering what had happened to him. It looked like there was blood running off in the puddles and rain. But it was dark. The road was black. And she only hoped that the man had run off of his own accord.

Too scared to defy the child. Too uncertain to leave him there in the rain. They continued walking down the street under the cover of her tattered umbrella.