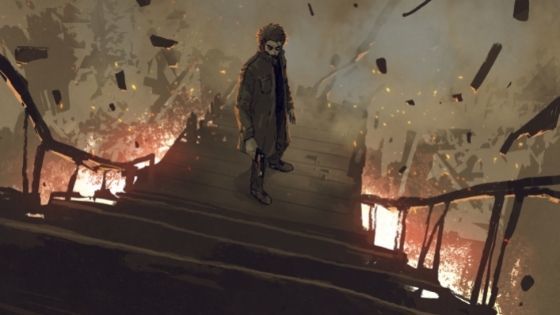 Nigel stood in the middle of the staircase, looking up at his nemesis staggering around on the balcony. A sense of satisfaction flooded his body and overwhelmed him. He wanted to gloat over the fact that he had finally put a bullet in his rival.

After all these years of hunting him down. Chasing him across continents. Over borders into hostile territory. Through city after city. Nigel finally had his showdown.

No matter that Nigel would most likely be dead himself within a matter of minutes. But the fact that he had finally accomplished his ultimate objective in life was enough for him. He could finally die happy and rest in peace.

He stood silent and still. His long, brown trenchcoat wafting up around him from the heat of the blazing fire below. Holding the gun at his side. Ready to fire a second time if needed. Not that Nigel thought he needed to.

Nigel had been training and practicing every day for the past seven years. He was sure of his shot. He was confident that Yuri would soon keel over and roll down the steps at his feet.

Then he would kick Yuri’s body over the edge of the stairs into the flames below. Then the fire would continue to consume the stairs and the house around him. And he would perish together with his nemesis here in this blazing inferno.

It was a fitting end to his journey. After seven years of being consumed by his lust and desire for revenge, it was the right way to go. His body consumed by the flames just as his life had been consumed by this single-hearted obsession.

Nigel didn’t mind dying like this. There were far worse ways to go. Growing old. Becoming a decrepit old man who could barely feed himself. Wasting away slowly. Or worse, getting into an accident and becoming paralyzed. No longer able to hunt down his enemy.

His very worst fear, though, had been of dying without having gotten his revenge. Nigel had lost count of the times he had woken up in a cold sweat. Dreaming of dying while his nemesis still lived. Stood over Nigel. Mocking Nigel as he slowly died.

But all of that was past now. Yuri would soon be dead. And even though he would die too, Nigel could rest in the assurance that he had his revenge.

The wooden stairway crackled and snarled below him. Nigel could feel the steps snapping in the heat under his feet. The heat blazed up hotter and higher around him. But still, Nigel waited for Yuri to drop dead at his feet.

He wanted to raise the weapon and fire off another shot. Nail Yuri right between the eyes. Watch the light fade from his eyes before falling into the flames. But at the same time, Nigel didn’t want to put Yuri out of his misery. Let him suffer every last second possible.

But Yuri didn’t fall over. After yelling angrily and stomping around, he bent over as if catching his breath. Nigel didn’t understand it. How could Yuri not be dead? He started to raise his gun.

Before he could fire off another shot, though, the stairwell under his feet began to cave in. Gravity took over, and Nigel’s body began to drop into the flames below.

“No!” he screamed in rage as he fell into the fiery inferno below. Nigel fired wildly into the darkness above. Hoping that one of his bullets would find its mark. Hoping to see Yuri’s body falling over the edge to join him as fuel for the flames.

But none of that happened. And Nigel screamed as long and as loud as he could. Not so much from the pain of the burns, as the despair of not watching Yuri die before he did.

And then the darkness overcame him.

When Nigel came to, he felt like he had been run over by a semi. Literally. He had heard the expression and mocked it. Thinking that others were exaggerating their pain. But that was precisely how he described it to the nurse hovering over him.

Her nametag said, Julia. She gave him something that made him feel better almost immediately. Then let him rest.

When he came to the second time, Nigel asked where he was and how he came to be here.

“Moss Forest Psychiatric Hospital,” she said. “A friend brought you into the General hospital two weeks earlier. You came to after about three days. Screaming that you were going to kill the man who murdered your family. So, they transferred you over here.”

Fear flickered in the woman’s eyes. “Yuri is the name of the man who brought you in. I don’t think you want to kill him,” she murmured.

“Yes, I do!” he growled. “My name is Nigel Berry Boatwright. And I shall have my vengeance on Yuri Vasyl Holub before I die.”

The nurse brushed a brown lock of hair that had slipped forward back behind her ear. She glanced over to the side. Then back at Nigel.

“Tell that to Mr. Holub because he is sitting right there.”

Nigel tried to turn his head, but couldn’t because of all the bandages wrapped around his neck and upper body. He could see a form in his peripheral vision.

“Why did you pull me from those flames?”

“I couldn’t let you die, Nigel. How long have we been at this?”

“Yes, seven years. What would I do without you? My life would have lost its purpose. I haven’t yet found redemption for my sins. I must find it before the chase ends.”

Yuri stood up and walked over to Nigel’s side. He placed a gun on Nigel’s belly. Pressed Nigel’s hand over the weapon.

“You must get well. The chase must go on. My life has no meaning without you trying to kill me for the terrible things I have done. I realized that when I saw you fall into the flames. I had to save you.”

Nigel looked at him in confusion. He picked up the gun and checked the magazine. It was loaded. He pointed the pistol and pointed it at Yuri.

“Hush. Get well. When you get out, come search for me again. Hunt me. Chase me down. When we meet again, you may learn why everything happened the way that it did.”

Darkness once again overcame Nigel. Only this time, there was no pain. Only sweet relief. This time he didn’t dream of Yuri. He dreamt of home. Of his wife. Of his son. Of his daughter. Of his family that had once been snatched so cruelly away.

His name was Nigel Berry Boatwright, and he would have his revenge. Maybe not this time around. But next, he would find Yuri and make sure he got what he had coming to him.