This Zombie’s On Fire – Dave Bailey
0 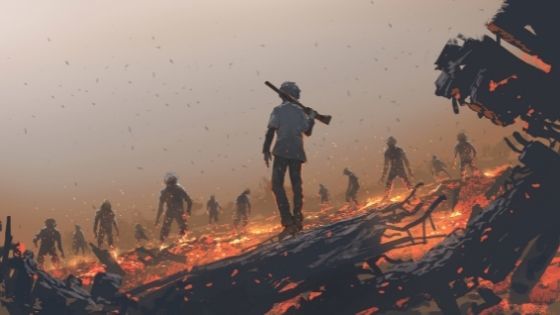 Ankur blinked a few times and shook his head in disbelief. What were these people, or creatures, or whatever they were? He had just blown the building they had been inside of to smithereens. And yet here they were, pulling themselves up out of burning rubble. They wouldn’t stop coming at him.

He sighed and rested his gun up over his shoulder as he watched them pull themselves through the hot coal and burning metal that covered the area. The heat of the fire wafted over him. It was stifling. Hard to breathe. Ankur twisted his head to the side to cough into the crook of his arm. But he never took his eyes off the undead corpses that were coming in his direction.

These were a different breed. They didn’t burst into flames themselves when they got too close to the heat like the Shufflers he had seen in NorthWorld. Nor were they fast like the Racers he had come across in Aria. They were slow but persistent. And the fire didn’t do a thing to stop them.

If only he had brought his axes or his swords. He hadn’t planned on needing them. Actually, he hadn’t even been expecting to come across any at all. Especially not this many all at once.

Someone had called in something suspicious. Ankur had come down on a whim. He had never been to Khmaodong before. He had been hoping to find out what the natives had seen and then dispel their fears of another local legend.

At the most, he thought he might find one of these creatures here that had made it up through a portal. Then he could have captured it and sent it back to his team to analyze while he took some much-needed rest and relaxation on the beautiful beaches this area was known for.

But now, here was a whole pack of them. He had caught one. But then he realized that a few others were roaming around. The locals showed him where they were coming from. Ankur had checked it out and thought there might be three or four hiding in the building.

He figured the easiest way to get rid of them was just to blow the whole building down. Expose them and then put down any that managed to escape. But that plan hadn’t worked. And now he had counted at least two dozen of these flaming corpses pulling themselves up out of the rubble.

Ankur looked around, but the men he had hired had all fled at the sight of the first corpse pulling itself up out of the rubble. One of the burning creatures closest to him snarled as it drew closer. The tall, lithe man slung the shotgun off of his shoulder and let go with both barrels.

The fiery corpse paused and snarled as it looked down at its chest and belly where Ankur had aimed. Ankur squinted, but couldn’t see much damage. He snapped the shotgun open and slid two more cartridges into the chamber. Closed it and fired again. This time aiming for the knee of the undead monster that was less than a few meters away.

This was a special weapon that had been developed by Ankur’s team specifically for close-range situations like this. It would have torn the legs off of a normal human. But it didn’t seem to do any major damage to this thing. The firey creature paused and hissed at him, but then immediately kept coming. And it picked up its pace as it got close and honed into his scent.

Ankur didn’t like this one bit. This was way too close for comfort. He scrambled to get away from this thing. He leaped from one rock to another, careful to avoid the hot molten metal flowing around them.

He had known that this was an aluminum plant before the people had abandoned it a few weeks back. But that wouldn’t have accounted for so much melted metal flowing around him now. It seemed to increase after they had tried blowing the building down.

Ankur hadn’t realized that it had been flowing around the area behind him while he was watching the creatures up ahead. There weren’t many places he could walk without stepping in it. The rocks and ground under him were hot. He could feel the heat through the soles of his shoes. The hard rubber melting and growing softer. He needed to find a way out of here and quickly.

He looked back at the fiery critter not far behind. It didn’t seem to mind the molten heat. It actually seemed to relish it and step directly in the reddish-orange lava flowing around it.

And then, Ankur slipped. He went down hard. Trying to stop himself with the barrel of the gun. But it slid out from under him. He twisted his body as he went down on the hard rocks. He felt the searing heat of the molten metal burning his skin. Hitting his head hard. And then blacking out. The last thing he saw, was the fiery undead corpse looming over him.