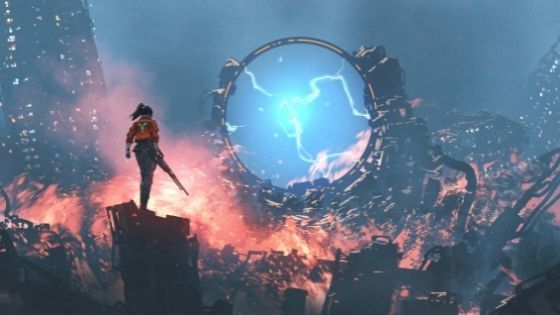 “No! What have you done?” Samara screamed.

Her body lay in a crumpled heap where she had been thrown during the blast into a dusty, smoky corner of the building. Well, what was left of the building anyway. The acrid smoke lay thick and heavy. Laced with the smell of burning plastic and sulfur.

Her nemesis walked slowly across the room toward the portal that now lay exposed. The heels of her boots clicked sharply as she walked. The crunch of rubble and the grinding of shards in each step grated on Samara’s already frayed nerves.

“Please, Andreia. Let us all through first. Then you can destroy the portal. We’ll never come back here again.”

Andreia set down the bag of explosives she was carrying carefully. Then mosied on over toward the woman in the corner. Samara panted heavily as she struggled to sit up. Careful to keep her arms pressed down against the floor and her back against the wall.

“My, my!” Andreia exclaimed. “Aren’t we resilient? Can’t believe you survived that blast. And are still moving. I underestimated you.”

Andreia stopped walking and cocked her head to the side to analyze the situation.

“Please. Let those of us that you haven’t killed through. We’ll shut it down ourselves.”

“Then you’ll just build another.”

“We took you in. We fed you. We treated you like our own. Why are you doing this?”

She slid the rifle slung over her back. Barrel pointed to the ground and swung it in Samara’s direction. Samara heard the click of the safety as Andreia prepared to pull the trigger.

“Wait, Andreia. But we didn’t create this portal. We don’t have that kind of technology. We won’t be able to create a way to get back here.”

“No, but you’ll just find another portal to use `somewhere else. Then you’ll go there and scavenge off the land from the already established inhabitants like the parasites that you are.”

“But we are a nomadic people. We are constantly on the move. We don’t pillage. We trade our skills and services to enhance the lives of the people we come across.”

Andreia scoffed. “Tell that to the ‘nomadic’ people that came through our portal when I was a child and wiped out my entire village in a single day. They took everything we worked for. They burned our homes. Killed our families. Destroyed everything we had built.”

“I’m sorry for your loss, my friend. There are truly evil people out there. But those aren’t my people. That’s not what we do. You can’t stereotype all portal hoppers like that.”

“It’s nothing personal against you or your people. It’s just what I and my people do. Our mission is to shut down all known portals.”

Andreia turned around and walked back toward the large, black bag she had set down. Samara felt her bones twisting back together and our muscles healing. The nanobots were working quickly. Just a little bit more and she would be able to move again. She felt sensation coming back to her feet and legs. She could wiggle her toes again.

She watched Andreia sling the rifle back over her shoulder before picking up the bag. Andreia turned around only to find Samara in her face.

“What? How did you manage to walk again.” Andreia gasped as she dropped the bag and tried to grab the gun.

Samara blocked Andreia with her left hand and punched her with a right uppercut. Andrei would have fallen except Samara was still hanging onto the base of the rifle and the sling held her up.

She gave the gun a hard tug to pull it up and over Andreia’s head. Samara pointed the barrel down Andreia’s face who had fallen to her knees and was now begging for her life.

“You’re no better than the people who wiped out your village. You’ve become like them yourself by blowing up this building to kill my family and loved ones.”

“No,” Andreia pleaded. “It’s not like that. Just let me go and I’ll never try to destroy this portal again. Please.”

Samara scoffed and mimicked Andreia when she said, “No, but you’ll just find another portal to blow up somewhere. Then you’ll go there and blow up buildings and kill innocent inhabitants like the murderers you are.”

She reached down to pick up the bag of explosives. Andreia tried to grab the gun and push it away. Samara didn’t give it a second thought. She pulled the trigger. The bullet hit her square in the chest.

Andreia lay on the ground. Looking up with a stunned look of disbelief on her face. Then she saw the green lines running down the sides of Samara’s arms. She started to laugh but ended up coughing as she choked up blood.

“Now, I understand. That’s why you survived the blast. And how you got up so quickly. Next time, I’ll make sure to start with the more powerful explosives.” She said glancing at the bag after she had finished coughing.

Blood still ran out of her mouth. There wasn’t much chance of her serving. But Samara pulled the trigger several more times to make sure Andreia didn’t get another chance to destroy the portal. Then pulled the trigger a few more times out of sheer anger and grief at the destruction the woman had caused. The sound of a radio cackled lightly. Samara picked it up to listen.

“Are you coming, Andreia? We don’t have much time. Set the timers then meet us down at the docs. Do you copy?”
“Roger that. On my way,” she responded mimicking Andreia’s voice and accent.

Samara turned to the portal. She couldn’t see it clearly for the flames, so she climbed up onto part of the wall that was still standing for a better look. The blue sheen of the portal looked normal although it seemed to cackle with more electricity than usual.

It would be a little while before the flames died down enough for her to get over there. Meanwhile, she would have time to take out Andreia’s team and avenge the death of her friends and family. As well as search for any other survivors.

Samara checked to see how many bullets she had left. Then hopped down to go hunt the rest of Andreia’s team and prevent them from destroying any other portals like this one.