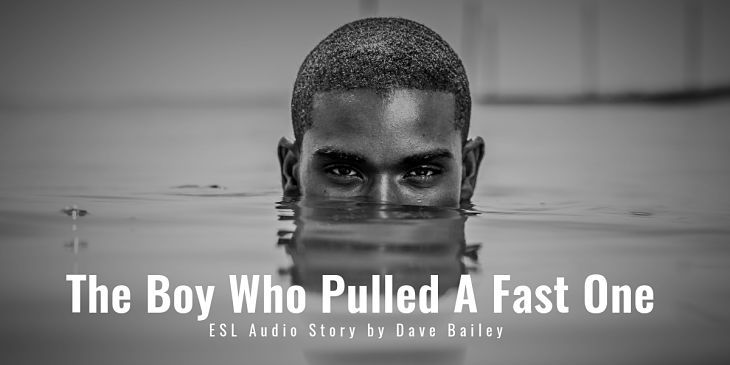 What Happens When An Entire Town Gets Tired of A Young Prankster And Decides To Give Him A Taste Of His Own Medicine? Read the newest short story that I wrote for my English students. You can listen to the audio through Gumroad or Patreon.

Read The Boy Who Pulled A Fast One

There was a boy who loved to play games. He was sneaky and played a lot of pranks on his family and neighbors. They didn’t like it. They didn’t like the things he did. They called him ‘the prankster,’ and they didn’t like him. They found him ornery and irritating. They were very upset at him and the pranks he pulled.

So, one day, they got together at the city hall and decided to pull a fast one on him. “What are we going to do to get him to stop this foolishness?” one of them asked.

“We need to find a way to teach him a lesson, so maybe then he’ll stop,” another cried.

They put their heads together and brainstormed up many ideas. They laughed and had a really good time. Some of their ideas were really crazy and far out, but they didn’t discard a single one. They continued coming up with more and more crazy ideas that became ever zanier and weirder.

Finally, his mother came up with the strangest idea of all. She wanted to fake the disappearance of everyone in town. It wasn’t hard to pull off because they lived in a small town near the top of a mountain that was completely surrounded by the forest.

It took them three days straight of planning and plotting to prepare everything. They did a lot of research and organized everything just right. When everything was ready, they all gathered once again in the city hall to hash out the final details and make sure they were all in agreement.

They had a big party with lots of food. It was a huge celebration. They couldn’t wait to teach this little brat a lesson.

The next day, they all woke up at 3:00 a.m. and headed out into the woods. They made strange noises to terrify the boy and wake him up. They all had a good laugh as they imagined his fear at waking up all alone.

It was true. Everything went just as they had planned. The boy sat up in bed terrified. He lay back down and hid his head under the pillow to drown out the noise. But the sounds got louder and louder.

The prankster jumped out of bed and screamed for his mother, but of course, she didn’t come. The boy went running through the house looking for her, but she was gone. No one from his family was in the house, so he cowered behind the sofa and cried like a little girl.

Some of the people felt sorry for him and wanted to go comfort him, but his mother wouldn’t let them.

“No way,” she said. “He needs to learn his lesson, and we’re going to see this through to the very end.”

Everyone stopped screaming and making noises now that the boy was awake. They all went back into the woods to wait for morning. A deathly silence covered the town. The boy became even more afraid of the silence than he had been with all the noise. It was eerie and strange.

He walked outside and looked around under the light of the moon, but no one was around. The boy ran over to his neighbor’s house and knocked on the door, but of course, no one answered. He went inside and saw that everything was a mess. There were strange symbols painted on the walls and floors in bright red paint that looked like blood.

“They are here!” some of the messages said.

“They are coming for you,” other messages said.

This happened in every house that boy entered, and he went to almost every house. The messages became weirder and uglier with each house he visited. The boy became more and more terrified. His heart was filled with dread.

If they were coming for him, he decided to play the ultimate prank. He wouldn’t let them have his town, nor his house, nor even him.

So, he went back through every house, setting it on fire. Then he jumped in his mother’s car and drove out of town vowing to never return.

When the people returned to the town, all the houses had burned to the ground. They looked around for the boy, but he was nowhere to be found. Everyone was horrified because their perfectly planned prank had backfired on them.

“Well, look on the bright side,” the boy’s mother said. “At least you don’t have to put up with his pranks anymore now that he’s gone.”

But the people were sad without the boy around. They slowly rebuilt their homes and lives, but they missed having someone around to pull pranks on them. Even though it irritated them, they still missed having something to liven up their day.

“We need to find the boy,” they said.

“We need to bring him back to play pranks on us,” others said.

What none of them really wanted to admit was that they secretly enjoyed playing that prank on the boy. Well, not playing the prank so much. But what they did enjoy was the time they spent together laughing while planning the prank. They all agreed that it was the best time they had ever had and decided to make it a yearly event.

Meantime, they sent out several search parties to surrounding towns and villages. Others swept through the forest to find out what had happened to the boy.

They finally found him holed up in a cave on the other side of the mountain. He had fled there to hide from whoever was coming. The entire village went together to bring him back.

He laughed and laughed when he learned that it had all been a prank.

“That’s the best prank ever. The joke’s on me because you learned from the best,” he said.

They all laughed and laughed while they planned future pranks to pull on each other. They changed the name of the city to Pranksterville, and tourists would come from miles around to get pranked and have a good time laughing at each other.

Of course, the boy grew up to become the mayor, and they all lived happily ever after. His mother was amazed and always expressed her shock and awe.

“That’s the best prank he ever pulled on me because I never thought he would grow up to amount to much,” she said with a huge smile and tears in her eyes as she gave an interview on a national network.

He just smiled back and said, “No, it’s not. One of these days, I’m going to come up with a prank to end all pranks. Just you wait and see.”

But no one ever came up with a better prank than the one they pulled the night he burned their homes all to the ground.

Thank you for reading my latest short story ‘The Boy Who Pulled A Fast One‘. I hope you enjoyed it. You can listen to the audio by clicking on the button below that says “I want this!’. You can also listen to more audios on my Patreon page.

Got questions or want to license a short story, hit me up in the comments or through my contact page.