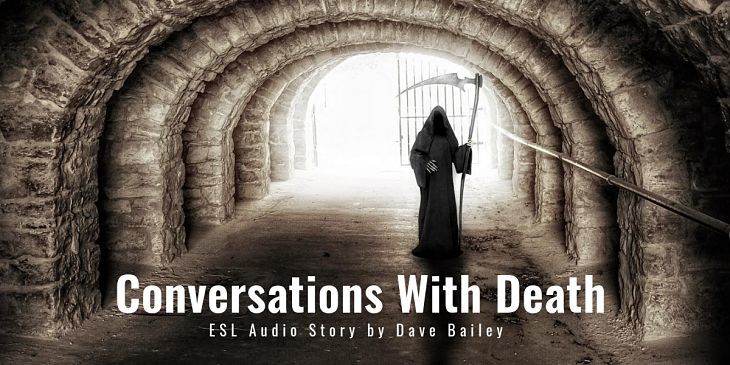 Hey! This is a new short story that I wrote for my English students. There are some interesting words and expressions that you might not know. So feel free to ask about them in the comments below. Enjoy reading this short story, and if you can listen to the audio on Gumroad or Patreon.

Once upon a time, there was a dirty, corrupt politician. He thought he was the cat’s pajamas. He thought he could do anything he wanted and get away with it. He skimmed money from all the social projects. He hung onto money that belonged to others so he could increase the interest in his bank account. In all, he was a real scoundrel.

He lived a long and happy life without ever really caring about other people, but one day all of that changed. He received a visit from an angel. It was the Angel of Death.

“Your time has come, Mr. Politician. I’m here to take you to the Great Beyond.” said the Angel of Death.

The man shrugged his shoulders and stood up to go with the Grim Reaper.

“I’ve had a long and happy life,” the man said. “I guess I’m as ready as I will ever be. But first, let me tell my family goodbye.”

The Angel of Death just laughed. “No need for that,” he said. “They are all coming with you.”

The man was shocked. “No, please. No. Don’t take them,” he begged and pleaded. They didn’t do anything. They don’t deserve to die.”

The Angel of Death said, “They’re not going to die because they did anything bad, just like you aren’t dying because you did anything bad. It’s just a part of life. Everyone dies.”

The man started to cry.

“What are you crying for?” the Grim Reaper asked.

“I’m sorry for all the bad things I did. I’m scared that I’m going to suffer for it. I want a chance to make things right.” he said.

“Oh, don’t worry. You will. You will,” said the Angel of Death. “It’s not over yet. Death is just the beginning.”

The man looked at him strangely. “It’s not. It’s the beginning of what?”

“This is where you switch roles and take the place of those you once mistreated. Now you get to experience life from their point of view,” the hooded angel said.

“What? No. That’s a fate far worse than death,” he said with a scream.

“You thought you were going to get off scot-free after all the things you did with just a slap on the wrist. Did you think you would just waltz into heaven or drop into hell? Oh, no, my friend. Now you get to experience the way you treated others first hand. That’s the fun part,” the Grim Reaper said with an evil grin.

“But that’s not fair,” said the man with a sigh. “I don’t deserve to be treated this way.”

“Treated what way? The way you treated others. They suffered at your hand. So, now it’s more than fair you take their place and experience what they experienced because of you.”

“That sounds like Karma from some ancient, far-eastern religion. I don’t believe in that stuff,” said the old man.

“No, no, my friend,” said the Fiend with a cry. “This is love. The love you were taught. Do unto others as you would have them do unto you. Your mother taught you this from the time you were just a child. You had your entire life to prepare and practice.”

“But she didn’t tell me that I would suffer the same fate others experienced at my hand,” the old man whined.

“How would your mother have known at the time exactly how it would play out. She only taught you what she sensed intuitively. But you didn’t even try to play nice or fair with others. You sought to take advantage of them at every turn your entire life.” the Grim Reaper shook his head in disgust.

“Please, no! I want a second chance,” the old man pleaded and begged.

“Sure, thing,” said the Angel of Death. “You’ll get it when you experience what you did to others. And you’ll have the chance to do better.”

“But will I remember this conversation?” the man asked.

“Of course not,” the Grim Reaper replied.

“So, then it’s not fair,” the old man whined. “How can I learn to do better if I don’t remember the lessons I’ve learned.”

The Angel of Death reached out to touch the old man with his scythe. The man screamed, and everything went black. Suddenly, he woke up in bed beside his wife.

He looked at the clock. Five a.m. Had it all been a dream? It felt so real. He was sweating and shaking and crying.

“What’s wrong honey?” his wife asked when she woke up beside him. “Were you having a nightmare?”

The old man leaped out of bed and ran to the kitchen. He cooked a huge breakfast. He served his wife and children breakfast in bed. He invited all his neighbors over for breakfast too.

Everyone was shocked at the change in the old man. At first, they thought he had gone bonkers. They tried to get him to calm down, but then they realized that they liked this new version of the old man much better. So, they let him be.

No one understood what had happened to the old man to bring about such a radical change. This wasn’t the same arrogant person they had known the day before.

But they didn’t mind it. They actually liked him much better. And always after that, the old man tried his very best to treat everyone around him the way he would want to be treated himself.

Was it real? Was it true? Would he live again as those around him? He didn’t know. He didn’t care. But he would do his best to be prepared. So, when his time came, he would be ready for the scythe of the Angel of Death.

Would You Like To Listen To the Audio for Conversations With Death?

Thank you for reading the short story ‘Conversations With Death’. If you want to listen to the audio, just click the blue button below that says ‘I want this!’ I’m asking 0.99 cents for it, but you can pay what you feel is fair or have available. Or you can listen to all the audios for the month on my Patreon page.

If you have any questions, just leave a comment or hit me up through the contact page.