City In The Clouds – Dave Bailey
0 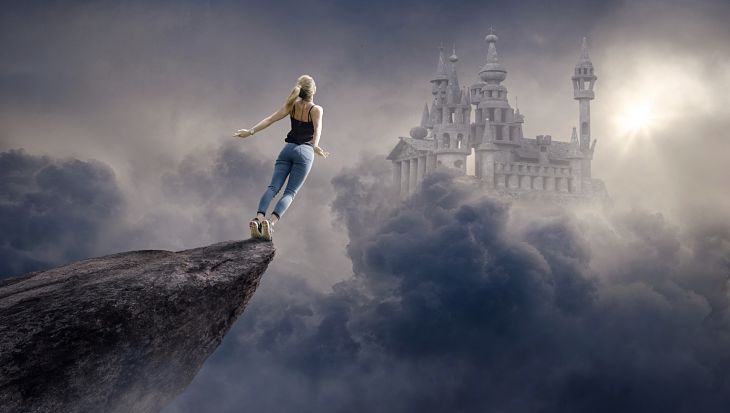 City In The Clouds

Look at the image above of the girl leaning from the cliff toward the clouds and listen to the song ‘Softly, Gently’ by Jon E. Amber while you read this short story.

Sunwhistle stood on the edge. Waiting. It had been a long day. The night would be even longer. She watched as the setting sun illuminated the world around her. Not that she really needed it. She could see just as well at night. Sometimes even better. The sun often glared brightly off shiny objects. Enemies could fly in directly without her seeing them. All they had to do was keep themselves between her and the blinding rays of the sun. Not a problem she ever had at night.

She stood watch over Aereyon. City in the Clouds. Protecting it from her enemies. It was her job. One that she was proud of. But recently, she had become distracted. A small series of events had begun unfolding below her. Normally, she wouldn’t have even noticed. Much less given it any attention. But after hearing some of the stories, she was curious. She wanted to know more.

Her sister would be almost eighteen if the rumors were correct. Two hundred and ten moons ago. A sister born among men. She wondered what her sister would be like. To be honest, she didn’t really even know what humans were like. She never had to deal with them. Many of her people didn’t even believe humans existed at all.

A few of the seekers among her people had gone down long ago into the lower layers of the atmosphere to explore and do some research. But they came back telling terrible tales. The atmosphere was thick and heavy. Oppressive. But the worst part was the humans themselves.

Humans had mistreated the seekers. Done terrible things to them. They were fearful. A few seemed to think that the humans simply did not know what to make of them. They referred to them as ‘ghosts.’ It seemed to be what they called the souls of their dead. But they couldn’t understand why humans would think that of them.

They had been hunted. Pursued. Captured. Some had even been killed by the humans.

After that, Aereyons avoided going down there. They were content to leave humans well enough alone. There wasn’t much to learn from them anyway. They were violent, brute beasts that destroyed everything they touched. They consumed their resources trying to transform their world around themselves instead of embracing it as it was.

Every few generations, a few brave seekers returned to the land below to see what had changed and studied their current behavior patterns. But they were much more careful in how they observed humans. Rarely interacting with them. Rarely letting themselves be seen.

She wondered if she would even believe humans existed herself had she not seen them with her own eyes.

Her father had been in one of the most recent exploration parties. He had gone down. Done his research. Brought back his report to the queen. A few days ago, a small party of humans had arrived. Acquaintances of her father from all those moons ago. Somehow, he had maintained contact with them. Supposedly, they came from time to time. But this was the first that she had seen them.

Sunwhistle had been on guard duty that day. Her father had brought them to a meeting with the queen. She could hardly keep from staring. They were so colorful. So, dense. So, solid. She wondered how they could even walk or move around.

After the meeting had ended, she followed them around. Her shift had just ended. Changing of the guards.

While following them, she moved ever closer. Gaining more and more courage. Until soon she was within earshot. She could hear what they were saying. And really, she wasn’t even that close yet. But she didn’t have to be, because their voices were dense too. Harsh. Guttural. The one in the back had a shrill, irritating laugh.

After Sunwhistle’s father had left the group to return home, the humans continued milling about the garden. She pressed in closer. Observing every detail. She wanted to pump her father full of questions.

“I love that man,” the woman with the shrill, irritating laugh said. “He is so charming. I would love to have his babies.”

The woman she was talking to looked after him wistfully but didn’t say a word.

“What?” asked the woman with the shrill, irritating laugh. “Don’t tell me you wouldn’t want to either.”

The other looked back at her. Smiled briefly. Shook her head as if she didn’t want to say it, but said it anyway, “I already have. That’s why I come here every year.”

The woman with the shrill, irritating laugh looked at her in shock. “You mean, Joy? But she is already eighteen years old. I thought we only met these Aereyons in the last ten years or so.”

Sunwhistle had been so shocked she almost cried out. The women must have sensed her because they stopped talking and moved away.

She fled back to her room and shut herself up for the next few days. Was it really true? Did she have a sister? A sister who was human?

That was three days ago. Today, she stood watch at her post. But this would be her final time. Tomorrow, she would go down to see the land herself. She would look for this sister.

Yes, it was forbidden. Only the seekers were allowed to go. They had to have special permission from the queen. But she couldn’t bear to get her father in trouble.

She couldn’t wait for the next expedition. Everyone would want to know why she wanted to go. Even if she did wait. The expeditions were only sanctioned every thousand moons.

No, she would go now. She would return with a group of humans. Follow them back to their home. Find this sister. And maybe, even bring her home.

Sunwhistle stood on the edge. Waiting. It had been a long day. The night would be even longer. She lifted herself up off the rock and glided softly, gently back home. Pack her bag. Wait for the humans to return. With her in tow. Softly. Gently.

I didn’t write this short story with any specific goal in mind, although I could definitely see the Aereyans possibly tying in with a part of the Edge of the Universe series. Or even becoming its own, full-blown story about Sunwhistle’s mythical hero journey. Leave a comment and let me know what you thought of her world, and if you’d like more.