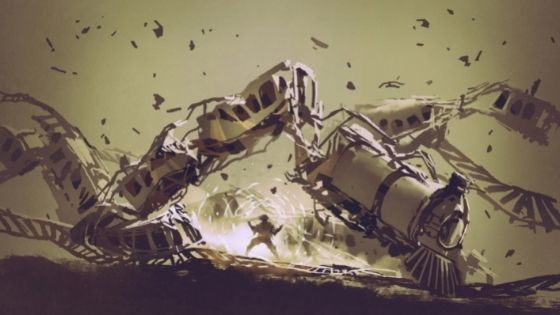 The old man came to at the last second and turned his head to meet Aleks gaze. He nodded and pushed the gourd toward the young man.

Aleks breathed a sigh of relief as he stretched out his fingers and slid the gourd toward himself.

He might have to drink human blood someday. But not if he could help it. He was just grateful that his first taste was from an animal. It didn’t feel as wrong even though it still made him sick if he thought about it too much. But he had to do this for Natasha. For Hēilóng. For the shaman. To honor the old man’s sacrifice to save Aleks.

He popped the cork off and lifted it to his lips. There wasn’t much. It wasn’t more than half full. The old man hadn’t had much time to work with. When he reached out his hand with the gourd, Aleks had noticed the deep lacerations on his arms and face where the dogs had torn into him before he managed to bleed them to death.

Aleks raised the gourd shakily toward his mouth and gulped it down quickly. Two swallows. That was all, but it was enough. He licked greedily at a few drops that clung to the sides of the opening. Willing the gourd to give up more. Willing his body to absorb the energy and refuel.

An almost immediate wave of strength shot through his body. Aleks was able to stand to his feet. But now there was no rush. The train was just a little over halfway past him. It wouldn’t move on past him before he had time to do his thing.

Aleks was like a mighty bear toying with his prey before delivering his final blow. He extended his energy outward toward the train. Feeling along each car for Natasha’s presence. Sensing the soldiers who were there on the train.

He could count everyone within the range his blast could reach. And that seemed to be even farther out than his earlier blasts. Aleks could sense that his next blast would be his strongest yet. Partially a mix of refueling with the blood and also the bit of practice he had acquired.

Aleks waited a bit longer till Natasha was out of his range. She was several cars away. Close to the engine and the doctor. He didn’t want her to be affected by it when he blasted the train.

He still didn’t like the idea of stopping the train like this. It was too dangerous. Derailing just one car could cause a massive pileup. Crushing Natasha along with everyone else. It was too risky.

There had to be another way to stop it.

A soldier kicked out at his head as he went by. Aleks ducked and turned.

At the same time, he noticed several soldiers leaning out the windows. Pointing guns in his direction. Preparing to shoot.

Blasting instantaneously in the direction of the men. He tried to hold back a bit. Measure his blast.

But it was strong. Aleks felt the wave wash over him as his body released energy. Powerfully. Much stronger than before.

Time seemed to slow down around him.

Aleks watched helplessly as the train directly in front of him lifted off the tracks.

He willed it to stay down low. To land back on the tracks. He wished he could use his energy to pull it back in. But the car of the train continued to rise. Pulling up the others around it.

The men in the window tossed back like rag dolls. Their guns flung high in the air.

The soldier who had kicked at him was only a dark-red outline on the train wall. A lighter red mist sprayed out around it.

The wheels of the engine still on the tracks squealed loudly as they spun frantically against the trails. Those that were completely off the rails spun uselessly.

The engine roared loudly. Smoke billowing up from the stack as it clawed to keep itself steady. The cars behind it rising one after the other into the air.

In the end, its forward motion wasn’t strong enough to resist the pull of the other cars and followed suit.

The entire train rising up off the track from Aleks’ single blast of refueled energy.

He watched in awe at the power of blast against the machine. Half-gloating at the look of horror on the doctor’s face while simultaneously cringing at the destruction taking place around him.

The train reached its zenith. High over Aleks’ head. Twisting and turning as they came crashing back down around him.

Aleks raced along the twisted metallic carnage in the direction he had last sensed Natasha’s energy. Afraid of what he would see when he reached her.

Hurrying breathlessly to find her before the soldiers could catch their breath and get their wits about them.

When he arrived at the engine in the low light of darkness, he realized that he had passed by the car Natasha had been in.

He hadn’t sensed her when going by. His heart sank. Had she been crushed in the wreck?

Aleks saw the doctor and engineer lying off in the grass a short distance. The doctor groaned and moved slowly, but the engineer was completely still.

He turned and moved back in the direction he had come from. Anxiously extending in his sense of energy. Feeling for any sign of life within the cars.

The signals were weak, but after seeing several dazed soldiers rising from the metallic wreckage, Aleks realized that his energy was low again.

It worried him. He didn’t have much left to fight off any soldiers. But he was relieved as to why he was having trouble sensing Natasha.

Fortunately, he didn’t seem to have to worry. None of the soldiers appeared to focus their attention on him. They were in shock and too dazed to notice him.

Aleks realized that most of them probably hadn’t even looked out the windows earlier and wouldn’t know who he was anyway.

Finally, he sensed Natasha. A soft blip on his radar. He dove through a window into her car that was lying on its side off the tracks.

He scrounged around and heard her moaning softly. Alecks reached for her in the darkness. Pulled several bodies away from her. He could sense that they were still alive. They were either unconscious or still too dazed to move.

Natasha reached up in his direction.

He pulled her into his arms and hugged her closely for a moment.

“What are you doing here? What’s going on?”

“Shhh! I’ll tell you later. Let’s get out of here before Dr. Setvastyan comes to take you away from me again.”

Aleks pulled her gently up. Then pulled himself out of the window. He looked around and noticed the doctor stumbling along on the other side. Trying to find the door in the dark shadows of the twilight. Trying to make sense of why the entrance to the car wasn’t in its usual place.

He pulled Natasha up beside him and placed his fingers over his lips in warning. They slid down the train on the other sidecar opposite from the doctor.

The light of the moon had begun to fill the night sky as they raced toward the vast forest.

Aleks noticed three large, dark shapes hunkered down in the shadows. Watching from the edge of the woods. He could sense their energy, but it was almost human. But not like the humans he had detected so far.

He didn’t mention them to Natasha. Aleks knew that they had noticed him. But they didn’t make any attempt to approach or block his escape.

They were fixated on the confusion still going on below. Aleks didn’t stop and stick around to see what was going to happen.

Right now, he just wanted to get somewhere warm and safe. Far away from here. Tomorrow, he would figure out what to do. There was no sense in worrying about the future.

For now, he just wanted to be present. Appreciate life. And contemplate the beauty of the moon and stars lighting up the trees around them as they walked back into the city below.