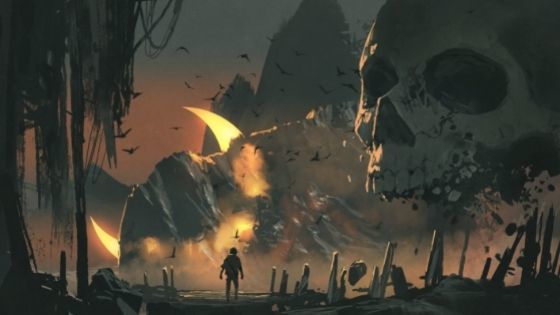 Search for the Moonstone Giant

Ken stood at the edge of the cliff overlooking the glaciers and mountains that lay before him. He breathed easier. The hardest part of the journey was over. He had made it. And he was still alive.

All he had to do now was find the one named Kalypso.

“Hey, Kalypso!” he yelled at the top of his lungs.

“Kalypso. Lypso. Ypso. So. So. Oh,” his voice echoed back mockingly.

The man stood there in the silence of ice and snow. Waiting for an answer.

But no answers came from the mountain.

It was growing darker. The giant crescent moonrock peaked out through the sides of the melting glacier glowed softly in the twilight. The sun would be setting soon. He needed to find shelter.

A colony of bats flew up from a cave into the grey sky. Their winged bodies silhouetted in the golden-yellow glow that emanated from the moonrock.

Ken glanced nervously over at the giant skull keeping guard over the mountain. He had heard the legends of these mighty beings who once ruled the land and roamed freely before being exiled to Rikdax.

His mother had once told him the stories of the Rikdax giants and how their fearless leader, Clagwor The Great, son of Morym The Fierce fought alongside the children of men in days long gone by. But then they had been betrayed and forced to live here in these icy, barren mountains.

Ken spun around. His heart racing.

A large, white horse came walking in his direction. Picking its steps carefully across the stones. Ken could see that it was lame. It limped badly. And yet still managed to move silently across the rocky area.

“Um. Were you talking to me?” Ken asked dumbly.

“Uh, yes! Do you see any other humans around?”

“Are you Kalypso?” Ken asked.

The horse snorted, “Of course not. Kalypso was a giant. Not a horse.”

“These are his bones, human. The last of the great giants. He stood watch over that moonrock. Hoping that its light would someday attract more of his kind. Or at those who could become as he.”

“What happened to him?” Ken asked.

“What happens to us all, human? Age. It beats the best of us. More than a hundred winters have passed since Kalypso took his final breath. As you can see, the ice and snow have built up between the mountains and the moonrock. Soon, it will be all but buried. Gone forever. Swallowed up by the mountains.”

Ken sat down on a stone. He sighed deeply and shook his head silently.

“Why did you seek him, human?”

“I came for his blood,” Ken replied.

The horse backed away and snorted loudly, “Crazy humans. You came alone to fight a giant. Well, too late for that now. There is no revenge among the dead.”

Ken looked up and burst out laughing. “No, silly mule. Not for revenge. I’m a researcher. A scientist. I wanted blood samples from a giant.”

“Great moonrocks on fire! I should kick your teeth in for calling me a mule. I haven’t been insulted like that Kalypso was alive. Of course, I couldn’t kick him though. He was a giant. He would have squashed me like I swat a fly.”

The horse stomped one of its good feet angrily and pawed the ground. Ken chuckled heartily.

“We best be getting somewhere safe before it gets completely dark,” the horse said.

“There are strange things that happen in the darkness,” the horse replied in a hushed voice.

The horse lowered and shook its head as if shrugging, “It happens in the dark, and we are all in hiding. So, no one knows. But we hear strange noises. Those we are acquainted with are never seen again. Kalypso protected us from the darkness. But after he passed, we were left to fend for ourselves.”

“Like monsters?” Ken asked, sitting up and looking around.

Ken sat up straighter. A broad grin on his face.

“Maybe my trip wasn’t in vain after all. I must get closer to this moonrock.”

“First, you have to survive the night, silly human. Let us find a safe place before the sun disappears completely. Tomorrow is a new day, and you may continue your journey.”