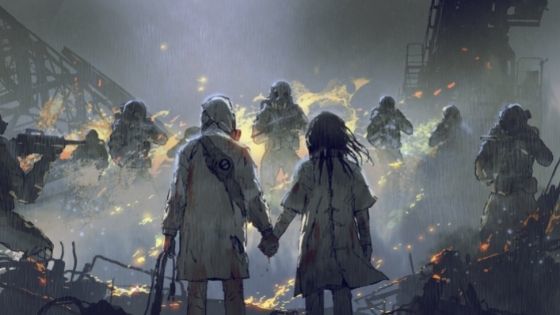 Jenkins slowed his pace when he reached the flames licking up from the floor. Even through the thick protection of his gear, the heat was almost unbearable. He held up his hand for the rest of the team to slow down.

“You’re up, Blakely,” he whispered into the mic.

Another figure stepped up beside him. He couldn’t see her beautiful face through the mask, but he could sense the violent chemist’s determination to capture Garfield Cook in each quick sure movement. Dead or alive. This was it. The closest they had ever come. They almost had him this time.

He checked the safety on his gun and scanned the room for any sign of his nemesis. His red laser cut through the smoke and flames while he covered Blakely so she could do her thing and put out the flames.

She had been preparing for this confrontation for years. Ever since the mad, fire monger had assassinated her family back in Tulsa. It had been easy to convince her to join them in their hunt for Cook.

They had been chasing him for the past two years unsuccessfully. Frustrated as their rival always seemed to stay two steps ahead of them. But not today. They had him. And soon, they would unmask him and put an end to his charade.

Blakely finished her preparations and tossed her weapons into the flames. She called them flame suppressors. It was something she had invented to put out the violent fires that Cook started.

They had almost caught him two other times. The flame suppressors had saved their lives both times. This time they had been more prepared and were farther along than ever. This could be it. Third times a charm, Jenkins thought to himself.

“Turn on your oxygen, boys. Flames are gone in three, two, one.” Blakely crooned into their earpieces.

Jenkins felt more than heard a low thump deep in his bones when the flame suppressors went off. Sucking up the air in the room, the fire died down almost immediately.

Some of the hotter sections caught fire again as oxygen seeped back into the room. Flames licked up once again around them, but it wasn’t even one-tenth as hot it had been just a few seconds previously.

Jenkins could see the outlines of his other team members pressing in around him from the light of the flames that were rising once again. There was a crash to their right that made them all jump. Jenkins spun around. His red laser beam cutting through the smoke. But it was merely one of the overhead walkways that twisted and bent in the extreme heat and had fallen.

He turned back and continued to press through the flames. He could see several of his soldiers surrounding someone. As he came closer and his eyes adjusted to the darkness and flickering flames, Jenkins realized it was a couple.

He couldn’t see the man’s face because he wore a mask as they did, but the woman did not.

“Garfield Cook! You’re surrounded. Let the woman go and come peacefully with us.”

The man and woman looked at each other for a long moment. Then the woman stretched out her hand toward them. Her hand burst into flame and grew brighter.

“Stand down, woman,” Jenkins yelled over the comm and held up his hand for his men not to shoot.

“Blakely, prepare to suppress the flames. Cole, can you contain her?”

“Working on it, sir,” Cole replied.

Jenkins didn’t know where Cole had come from, but he definitely wasn’t normal at all. His file was classified, and Jenkins hadn’t been allowed to access it. All he had been told was that Cole could suppress most mutant abilities.

The woman’s eyes blazed, and she screamed as she held out her hand in their direction. But the flame on her hand didn’t increase in size or heat as she seemed to expect. Slowly, it diminished and flickered out. She screamed in anger and fury once again.

She reached out and took his hand lovingly. Tears streamed down her face.

Jenkins nodded for the men to move in and make the arrest. The men were nervous about it, but Captain had given strict orders for them to be brought in alive if at all possible.

“No, love. Please, don’t do this,” she whispered back.

“Take them down, boys,” Jenkins hissed. “Cole, contain him.”

The soldiers pressed in. But it was too late. A bright blue ball of light burst up in front of Cook. Jenkins glanced over at Cole to see if he could stop it.

Cole was shaking like a leaf. His outstretched arms trembled wildly.

His rival, Cook, vibrated as well, but the blue ball of light didn’t stop growing. He pulled the woman by the arm toward him and shoved her violently into the blue ball.

Jenkins realized that Cole was unable to stop Cook from doing his thing.

Bullets blazed around the room. Lighting up everyone’s uniform. Jenkins could see his men’s eyes in the reflections of muzzle fire from the weapons.

Cook’s body trembled and jerked wildly as the bullets riddled his body. The soldiers stopped firing when he fell to his knees and slumped forward.

The ball of blue light disappeared. Darkness consumed them once again. It took a moment for Jenkin’s eyes to adjust to the darkness once again. The only light came from the pale flames that still flickered around them.

It took a second for him to get over his blindness from the flash of the guns. But when he did, the woman was nowhere to be seen. Only Cook lay there gasping for his final breath.

“Where’s the woman. She must have slipped off in the darkness. Find her.” Jenkins barked into the comm.

“She’s gone, sir,” Cole replied. “He created a portal for her to escape.”

“What are you talking about?” Jenkins growled. “A portal to where?”

“Only he knows the answer to that. But I don’t think he was ever our Fire Monger in the first place.”

“He’s the one that killed my family,” Blakely yelled.

Cole shook his head. “He didn’t have that power. He had no fire essence in him. The only ability he has is to open portals to other places.”

“I saw him on the tapes before everything went up in flames,” she screamed.

“Uh, hmmm. Most likely, Cook became the face of the attacks to protect her from ever being seen. We just happened to get lucky and see them here together. Otherwise, we would have killed him thought it was over. And she would still be out there carrying on her attacks.”

Blakely stormed off. Jenkins angrily kicked a bit of burning debris that happened to be in front of him. It smacked into Cook, still lying on the floor. He groaned raspily.

Jenkins realized he was still alive and kneeled down beside him. Pulled off his mask and grabbed him by the lapels.

“Where did you send the woman? And what was the point of all this?”

“We came to protect humanity from the Vioth’ito,” he wheezed “Melantha and I were the only ones who stood in their way. Unless you convince her to continue the fight, you’re on your own.”

“Where did you send her?” Cole roared as he dropped to his knees beside Jenkins and shook the dying man violently.

“All that remains of me are blood and bones,” Cook whispered with his final, gasping breath.

But it was no use. Cook no longer breathed. Jenkins pushed Cole away.

“Death incarnate,” Cole finally replied. “I’ve heard of them but thought they were only a myth. But if Cook is right and the stories are true, then we are all doomed.”

Cole stood up and walked away. He refused to talk about it any more as if speaking of this great evil would somehow attract them.

Jenkins gathered up his men and prepared for extraction with Cook’s body. He needed answers, and he wasn’t going to find them here. He needed a higher level of security access to find the answers he needed.

Who was Cook? Who was Cole? And who were the Vioth’ito?

He wouldn’t stop until he got his answers.

“He said something about going out to look for someone named Melantha.”

Thanks for reading this short story. I hope you enjoyed it. Let me know in the comments belove if this is a story that you would like me to write more about. Which characters interest you the most? What concepts or ideas intrigue you?