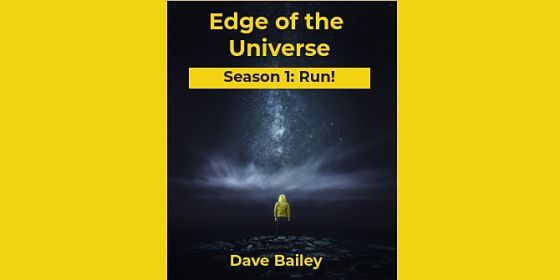 I’m currently writing a new book series called Edge of the Universe. Episode 1 is ready at 34,730 words (about 100 pages). More episodes are on the way. Read now on Gumroad (PDF, epub, or mobi for Kindle) >>

Here’s a brief description of what it’s about:

“When an international technology company, offers a naive young scientist billions of dollars for his technology to splice DNA, Art thinks he’s made it and is living the life of his dreams. But when jealous colleagues, greedy corporations, and corrupt politicians get whiff of its true potential, Art will have to do whatever it takes to keep his invention from falling into the wrong hands.”

I think this will be about 4 episodes long, but then I always write more than I plan, so I think it may be as many as 10 episodes.

I’m calling this series Season 1: Run! as I originally planned out 3 Seasons for it. But then again, I won’t know until it’s written. I’m hoping to finish this series by the end of the year, but we’ll play it by ear. I don’t want to rush the muse.

If you’re patient, you can wait…or you can go ahead and start reading Season 1 as I write it on Gumroad >>