Dragon Rider: The Making Of A Warrior – Dave Bailey
0 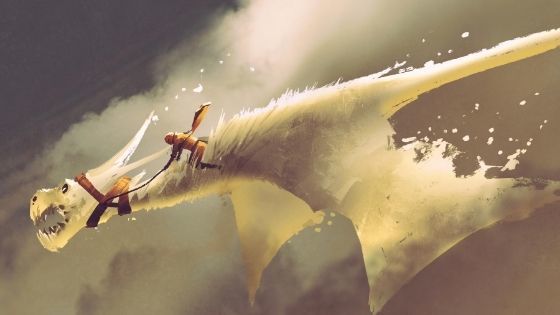 The dragon and its rider bolted into the night sky as hot, angry tears rolled down Akio’s cheeks. They didn’t make it far before the whipping wind peeled each one away from his face.

Akio looked back to see the Enforcers still blocking the way home. They seemed relieved that he fled without putting up a fight. They hadn’t even tried to stop him from leaving or attempted to pursue him. He realized that all they had wanted to do was prevent him from returning home with his dragon.

The fear in his heart abated when he saw that no one pursued them. Suddenly, Akio felt like a coward. He the might dragon warrior fleeing from the people he had fought to save.

He screamed with frustration into the cold, night air. The silent stars above his only witness. Not even the moon was out yet to watch him ride the wind. Shooting across the sky on the strong, firm back of Yunlong, the dragon he had pulled from the clouds. His only consolation for all of his effort. Everything he had been promised was a lie. They had used him for their own end.

“No!” Akio roared, so furiously that his voice cracked and his throat hurt. It felt like he had torn a vocal cord. But he didn’t care. It wouldn’t hurt more than the tear in his heart. It wouldn’t ache more than the pain in his soul.

He would be hoarse tomorrow. He wouldn’t be able to speak for days. But it didn’t matter. Nor did he care. There was no one for him to speak to now except Yunlong. And it wasn’t even necessary since the dragon could read his thoughts. Speaking to Yunlong was simply a human habit that made Akio feel like the giant beast could understand him better even though he knew it wasn’t true.

Yunlong understood the human more thoroughly with a single sweep of her mind than Akio could ever express with a million words. And that was why Akio couldn’t bear the thought of leaving his new friend behind in order to return home.

“It’s not fair you can’t go back home with me!” he whispered hoarsely and instantly regretted it. He swallowed the pain and coughed to clear his throat.

Akio felt the pale dragon sigh briefly. He picked up on a mix of feelings. Anger. Regret. Sadness. He caught glimpses of hundreds of previous battles. But a strong residual sense of loneliness pervaded her memories through all of them.

“Humans and dragons were never met to coexist. We were only intended to be used as tools for a specific purpose. The Enforcers are right. It would only create confusion if I were to return with you.”

The rider didn’t try to voice his thoughts. He could feel her in his mind. Deep in each thought. No matter how brief. She could feel his pain. Sense his frustration. And he knew she understood him.

How was that possible? Two beings that were so different. Two creatures that warred for centuries. Mortal enemies throughout time. Yet felt the same feelings. Thought the same thoughts. And connected at such a profound level.

“What will you do now, Cloud Rider,” she asked in his mind.

It brought a brief smile to his face in spite of his frustration. It was a compliment coming from her because when they first met, she had mockingly called him Earth Crawler.

“I will find a way to return home and reveal the truth. I will expose those who sent me. They will regret choosing me to do their dirty work.”

“You can still go back to your people. You just can’t take me. Tell them your truth. They are your loved ones. They believe the lies, surely they will believe the truth when you tell them.”

“They won’t. They’ll call me crazy. The Enforcers will make sure that everyone thinks I’ve gone mad. Without you, I have no proof. And that is the only thing they fear. Having their lies exposed and people learn the truth.”

“Why is that important? You know the truth. And that is what matters. You can live a long and successful life with your people.”

Akio shook his head as he tried to process his emotions.

“No,” he finally sighed. “I’d rather live alone but free than to be enslaved with lies no matter how comfortable they may have once been.”

The rider felt his dragon smile. “Very well, young human. There is hope for you. Maybe we’ll make a real warrior of you yet.”