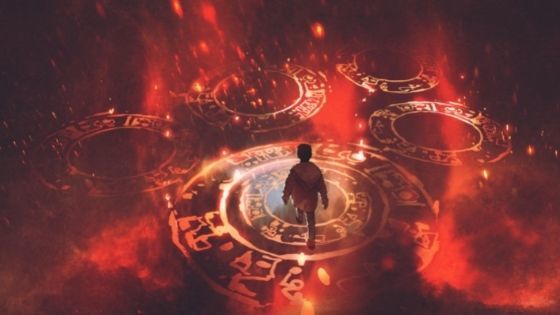 Tom awoke with a start. The third time he had the same dream this week. He took a deep breath in the darkness to calm his rapidly beating heart. He raised his hands to his head to make sure it was still in place. It was. But the dream seemed so real. He had felt the dark creatures that pursued him slicing off his head in the dream. Biting and tearing at his flesh as he fell to the ground. But that’s all it was he assured himself. Just a dream.

He rolled over and tucked his head deeper into the pillow. Continuing to breathe deeply so he could fall back asleep. Shoved his hands back under the covers. They were glowing again. He could see them through the sheets. He jerked them back out and looked at them closely. There it was. It had happened before. But the glow wasn’t as strong. Not like this. It had been lighter. Barely visible. He had brushed it off as a reflection of the night light in his room.

But under the sheets. No way. This was different. He sat up quickly and shook himself briefly. Looked at his hands again. Fingers splayed wide. He squeezed them open and closed. Wiggled his fingers around. His hands looked normal. It didn’t seem to be a dream.

So, he ran some reality checks. Pinched his nose and tried to breathe. Nope. Most likely awake. He stood up and jumped twice. Gravity pulled him right back down. Definitely awake. But just to make sure he did one more. Finally, Tom glanced around the room to see the cover of a book. Made note of the title and looked away. Then glanced back. It hadn’t changed, and he could read it normally. This was definitely no dream.

His hands were still glowing softly, but already a bit dimmer than a few moments before. Tom reached over and flipped off the nightlight. He could see the glow clearly now. It was soft, but definitely there. He ran his hands over the sheets and pillow. Lighting them up. Throwing soft shadows against the wall.

Tom sucked in his breath sharply and dove under the covers. What was this? What was going on with him? Images from the last horror movie he had watched flashed through his mind. A young girl with stigmata. Light shining from her eyes and mouth. Was he possessed by some demon? Would he need an exorcism? He shuddered and mentally decided to stop watching those kinds of movies.

He closed his eyes tightly and tried to go back to sleep, but it was impossible. Not with his heart beating so rapidly and his breathing so shallow. Tom was way too tense. So, he stretched his arms and legs. Trying to relax. He consciously slowed his breathing down and took deeper breaths.

Sleep evaded him, and images of the dream continued to flash before his eyes. Slowly, bits of the dream came back as he began to remember what had happened.

First, a great bird had flown in from the North. A dark rider seated upon its back like he remembered from the old Atari joust game his uncles liked to play. It circled around him flying about fifty feet over his head.

Then he heard the sounds of hounds braying as if they were on a fresh trail. Tom had begun running. His heart pounding. His breath ragged. Fear clutching his throat. Soon, he saw the hounds bursting out from the underbrush. Their dark masters close behind them. He tried to run faster, but his legs refused to cooperate.

Tom’s legs were made a running motion, but his body barely moved from the location he was in. Then the hounds were tearing at his legs. Only they were no longer dogs but large reptilian creatures. Tom saw the smile of a large, gray being as it raised its sword and brought it down across his throat.

And that was when he had awoken with a gasp.

Tom lay there a few moments longer. Mulling the images over in his mind. Trying to understand them. Trying to make sense of what they meant. But nothing came to mind. He had no reference for these images even though he was a heavy dreamer and often wrote his dreams down in his journal. But never had he dreamt anything even remotely similar to this. He made a mental note to look up these dream symbols online in the morning.

Glancing down at his hands, Tom noticed that his hands had stopped glowing. That was a relief. The last thing he needed was to wake up in the morning glowing blue like a smurf. He smiled at the thought and drifted back to sleep.