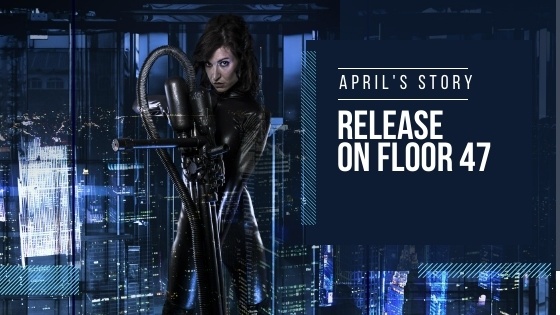 Bill shifted uncomfortably in his spot. “I really don’t think that’s a good idea, ma’am. I’m sure they have these folks down here for a reason. We should probably go get the proper authorities and let them handle this.”

The man that Bill had identified as Alpha Four’s brother came shuffling over to their elevator.

“Warning. Warning.” the elevator voice started up. “Strange element approaching. Be careful. Would you like the elevator to head back up to Forty-Seven?”

Bill started to say yes, but April reached out and punched him in the gut hard enough to make him keel over.

“Shut up!” she said. “We’re gonna do this whether you like it or not. We’re gonna get them out of here.”

Bill rolled his eyes and sighed. “Why me?” he asked pleadingly.

She watched expectantly, but nothing happened. The doors remained closed. Alpha Four’s brother reached out to touch the glass. He mouthed something at them, but April couldn’t understand what he was saying. No sound entered the elevator from the outside, and even if it did, the blare of the siren inside of the elevator would have drowned it out.”Protocol three breach. Warning. You have attracted the attention of the insidious. Protocol three recommends we head back to floor forty-seven. Permission to leave.”

“No,” April replied. “Turn off the sirens. Sirens off. Stop the alarm.”

The blaring alarm finally shut off, but the yellow warning lights continued to flash around them.

“Open the door,” April commanded, but nothing happened. “Let us out. Release us. Open sesame.”

“I’m sorry, but protocol does not allow for opening of the exits in this sector. Viewing room is only for observation. It is to protect viewers from contamination.”

“Contamination from what?” April asked.

“I’m sorry, but that is classified information. Please state your ID and the password for further information.”

“Oh, you stupid robot,” April yelled in exasperation and kicked at the glass.

“Please refrain from touching the glass as you will attract unwanted attention from the subjects.”

April looked around from something to smash the glass. She tried yanking one of the seats from the wall, but it didn’t budge. She gave up quickly because she realized they were made of plastic and foam. Even if she could remove one from the wall, she wouldn’t be able to do much damage.

“Calm down,” Bill said. “The glass is bulletproof. You couldn’t break through if you shot straight at it and this thing obviously isn’t going to let you out. Besides, it’s probably for the best because the system may be protecting you from some insidious, fast-spreading virus or contagious disease that they are trying to treat.”

As soon as he said the words bulletproof, April looked at his holster. “Where’s your gun,” she demanded.

He felt down towards his waist and realized it wasn’t there. “It must have fallen off in our scuffle,” he said. “But even if I had one, I wouldn’t let you go firing it off in here. You’re nuts. The bullets would ricochet this small room and hurt one of us.”

April grabbed at his belt and started tugging at his waist to unbuckle it.

“Whoa, there momma! What in the world are you doing?”

“Shut up and give me your belt,” she demanded.

Bill sighed and finished unbuckling it. He handed it to her with a scowl. “Please be careful with this thing. That belt buckle cost me a pretty penny.”

April turned back to the glass where Alpha Four’s brother was still leaning against the glass. His glassy eyes looked blankly in their direction like he couldn’t even see them. He drooled, and his saliva ran down the glass.

So, she backed up to get away from where he leaning against the elevator. April flipped the belt over her shoulder and whipped it back around to try and crack the window with the metal tip of the buckle. But it didn’t even scratch the glass and barely even made a sound when it hit.

After four or five fruitless attempts, she gave up and sat back down in one of the seats to catch her breath. She stood back up and started to hit the glass again.

It was obvious that he was trying to be quiet and not attract the attention of the others around him. When he got close, he waved his arms at them as if ordering them to calm down.

“Open the door,” April yelled. She waved and motioned with her hands for the man to let them out.

The man outside made a signal like she was crazy with his finger to his head. Then he pointed up as if telling them to leave.

By now, Alpha Four’s brother had noticed the man and started to shuffle his way around to the other side. He got to the man and kept trying to grab on to him, but the man easily pushed him away. He pointed the gun at Alpha Four’s brother who acted like he had never seen one before in his life. He kept grabbing at the gun and trying to poke his finger down the barrel.

The guard kept pointing up for them to leave and became exasperated when they didn’t go. Not that April even knew how to operate the machine. The man outside pulled out his walkie-talkie and started talking excitedly to someone while waving his arms. More of the other people in the room began shuffling over to him.

He pointed back up defiantly one more time and then turned to leave. He half-walked and half-ran as he tried to avoid the oncoming mob. April could tell that he was furious.

He shrugged and sat down. “I’m gonna be in so much trouble. They’re gonna kill me.”

The elevator’s voice came back on and said, “Remote control protocol initiated. Elevator will now return to floor forty-seven. Please hold on till we reach our destination.”

“Let us off at floor twenty-two,” April said.

“I’m sorry. Exit at floor twenty-two not permitted. Exits only at fifteen, twenty-eight, and thirty-three.”

“Let us off on fifteen, please,” April said.

“Impossible to stop on fifteen. Manual override has been engaged via remote control by someone with a higher level of access. Please state your ID and password to override manual control.” the elevator said.

“C’mon,” she said tapping Bill on the shoulder. “What’s your ID and password?”

“I don’t have one yet for the elevator,” he replied.

“Well, use what you do have. Maybe it will work.”

“Elevator, my ID is Bill Redford. Gamma Eight. My passcode is papa Romeo-Four-Zulu-Delta-Two.”

“See,” April said with a grin. “Now, tell it to let us off on the fifteenth floor.”

Bill repeated the command, but the elevator denied his request.

“Your level of access is not sufficient to override the controls. Someone higher in command has control of the remote access. Please stand by until the elevator comes to a complete stop.”

The doors opened, and there were several men in the room waiting for them.